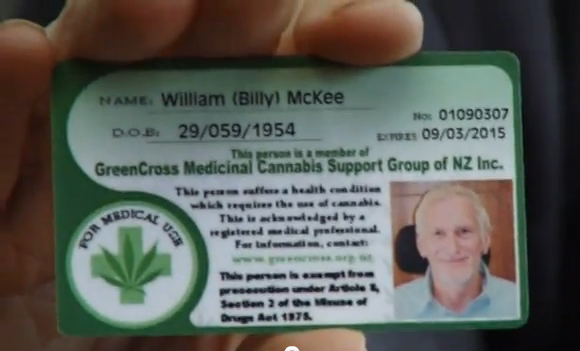 On Wednesday, 57-year-old Levin man Billy McKee was found guilty in the Palmerston North District Court on four charges of selling cannabis and one of cultivation.

Libertarianz Spokesman on Drugs, Dr. Richard Goode, described it as a day of shame for the New Zealand police and their political masters in the Beehive.

“The job of the police is to prosecute criminals, not to persecute amputees. McKee lost a leg below the knee when a drunk driver deliberately rammed his motorbike decades ago. Since then, he has suffered constant pain from nerve damage to the stump. Now he uses medicinal cannabis – it’s the only thing that works.”

Goode quotes McKee: “If I could get medication from my doctor that worked for me then I’d just use it … but the medication I get from the doctor makes me really, really sick.”

“McKee might never have come to the attention of the police,” Goode surmises, “but he runs GreenCross, a support group for medicinal cannabis users, and actively campaigns to make cannabis legally available for medicinal purposes.”

McKee was targeted by the police in an undercover sting operation. A constable contacted McKee seeking help for a fake ailment. “This low-life pretended to suffer from painful migraines,” says Goode. McKee at first sold the policeman hemp oil, a legal product, and suggested he see a doctor. But he was persuaded to sell the constable cannabis. “McKee did what any decent human being would do, and tried to help ease the man’s suffering,” says Goode. “For this simple act of compassion, he could now receive a lengthy jail sentence.”

“What has this country come to,” laments Goode, “when the police think that the best use of their time is to engage in treachery and deceit in order to entrap and torment traumatised road accident victims? A better use of their time would be to get drunk drivers off the road – like the drunk driver to whom McKee lost his leg in the first place. Instead, they take sadistic pleasure in brutalising the sick.”

“As for their political masters in the Beehive – those who voted to defeat Metiria Turei’s Misuse of Drugs (Medicinal Cannabis) Amendment Bill in 2009 must now hang their heads in shame.”

Goode concludes, “The War on Drugs™ is a war on the medically sick, waged by the morally sick. It must end.”