… “For Christ sent me not to Baptize, but to preach the Gospel:…” (1Cor1vs17)
Paul clearly teaches that he was not sent to baptize.

Now compare this with Christs commission to Peter and Co…
“Go ye into all the world and preach the Gospel to every creature. He that believeth and is Baptized shall be saved; he that believeth not shall be damned…” (Mark 16vs15,16).

We see this is also recorded in Matthew “Go ye therefore, and teach all nations, baptizing them in the name of the Father, and the Son, and the Holy Ghost…” (Matt 28vs19)

Thus Christ *Did send Peter to Baptize!*
This distinction between Paul and Peter ought to be enough to show you God had different Commissions for each of them…

In Luke 24 vs 46-49 Peter is told to “Begin at Jerusalem and to ‘tarry’ there until they recieve the ‘Power from on high’.”… and in the first chapters of the Book of Acts , having been taught by the risen christ 40 days ‘The things pretaining to the kingdom’ (1vs3) We find Peter obediently Staring his ministry in jeruselem, preaching to the Jews ‘That it behoved Christ to suffer, and to rise again the third day, and that repentance, and the remission of sins sould be preached in all nations…(compare Luke24vs46,47 to Acts 2 esp14-47)
Note in this chapter The Death of Christ on the cross is not preached as a glorious attonement for sins, but as a terrible act of sin and rebellion against God! (read Acts2vs22-23 KJV)
“Ye have taken, and by wicked hands have crucified and slain:”

Note that He preaches the Cross and resurrection of Christ …not as salvation but as prophetic evidence the Christ is Lord… and that By his resurrection they stand in Judgment of God…and God would render the Enemies of Christ ‘his footstool’
“Let all of the house of Israel know assuredly, that God hath made that same Jesus, whom ye have crucified, both Lord and Christ.” (Acts2vs36
“What shall we do?”… cry those Jews whom were pricked in their hearts by peters Preaching of Condemnation?
“Repent and be baptized every one of you for the remission of Sins” (vs 38)
“Save yourselves from this untoward generation” (vs40)
Then the believers sold all their possessions and had all things common. (vs44,45)
(They did this in expectation of Christ eminent return and setting up of his kingdom)

And We find Peter again Preaching The Cross *as Murder…not salvation* in Acts 3vs 13-18 …and most importantly in vs 19,20 he says “Repent ye therefore, and be converted, that your sins may be blotted out, when the times of refreshing shall come from the presence of the Lord and he shall send Jesus Christ, which before was preached unto you: whom heaven must receive until the times of restitution of all things, which God hath spoken by the mouth of all his prophets since the world began.”

Note that Peter is tell Israel to repent of their Evil rejection of their messiah…Christ.
Note that Peter does not preach that Salvation occurred by the work of Christ on the cross, but would occur at a future time.
And if you read the rest of the Passage of Acts 3 you will see that Peter is specifically preaching to the Jews in respect to the Covenant God had with their fathers.

When you put all this together you realize that Christ Sent Peter to Re-offer the kingdom to Israel using the Death , Burial, and resurrection of Christ as evidence that Jesus was indeed the REAL DEAL , and that after they had repented and received their messiah the disciples were to spread out throughout the world and preach the gospel of the kingdom for a witness unto all Nations (Mat24vs13,14…) Then the end would Come with the Return of Christ as King of Kings and Lord of lords, destroying the antichrist and the enemies of Israel…. And that those whom had not received the mark of the Beast, those whom had endured unto the end…they would be saved… the rest would be thrown into the Winepress of the Wrath of God. (Rev19, Rev 14vs 18-20)
Then Christ will establish his millennial kingdom in Israel. (Rev20vs4)

Yet The Jews rejected the preaching of Peter… and his commission did not get passed the first stage… Did not go out into all the Earth….. thus the end did not come (Mat24vs13,14). Instead a great persecution of the disciples sprang up and though Peter continued in Jerusalem, many were scatted into the regions about yet preached to Jew only. (Acts 8vs1, Acts 11vs19).
And because Israel failed to repent, the Kingdom of Christ was postponed and the Nation of Israel was reserved unto Judgment. Thus began 2000 years of persecution and slavery for the Jews. “And they shall fall by the edge of the sword, and shall be led away captive into all nations: and Jerusalem shall be trodden down of the gentiles, untill the times of the gentiles be fulfilled. (Luke24vs24)

And it is during this dispensation of the Judgment of Israel, that god raised up Paul to Preach Free Salvation to the gentiles. It Is to Paul The God reveals the secret mystery that was previously hidden…that the Death, burial, and resurrection of Christ was the divine atonement for the sins of Mankind.
It was to Paul that God sent to preach this Gospel of salvation…without works. (Eph2vs8,9)… thus with Paul’s Gospel the act of Baptism is not necessary. When we believe the Gospel we receive the righteousness of Christ (Pil3vs9, Rom5)…and he took upon himself our sins.
When Christ was Baptized…we were Baptized…we receive his righteousness. 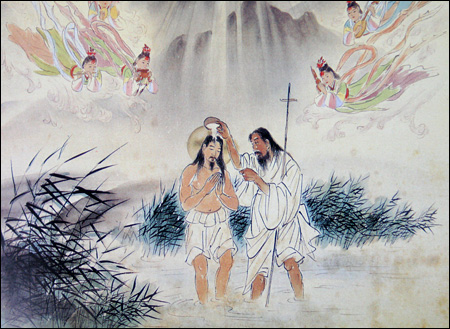 “Christ’s Baptism by John” is part of the series of sacred paintings made by Woonbo Kim Ki-chang. / Courtesy of Heaven’s Door Gallery

I have got to leave off here as I’m off to see my Family for xmas. I post this Sunday message a day early. It is by no means exhaustive yet I am out of time. I hope it at least show you that Paul’s commission was different to Peters commission, that Paul’s view of the Cross was very different to Peters…. Paul Loves the Cross! Peter preached it as murder. I hope you see the difference between The Gospel of the un-circumcision (No Works…not a part of the Covenant of Circumcision), fro Peters Gospel of the Circumcision (The preaching Of Christ as King of the Jews). (Gal 1vs11,12, 2vs7,8)

Ask yourselves why those Christians whom deny the truth of Dispensationalism do not today sell all their possessions and have all things Common…as the followers of Peters Preaching did in the early Book of Acts?
They are hypocrites! ( I will be putting a message about this dispensational aspect soon.) 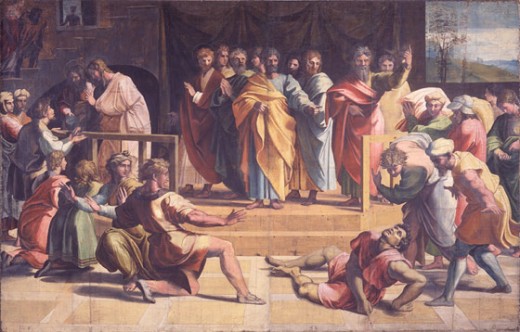 Anias and Sapphira struck Dead for trying to decieve the Apostles regarding selling all their posessions and laying the money at the Apostles feet. (Acts 4vs32-37, 5vs1-12)

May The Lord Bless those of you with the eyes to see and ears to hear this message.
Tim Wikiriwhi Libertarian Dispensationalist Christian…Sinner saved by Gods Grace.
Praise the Lord for his mercy unto me.