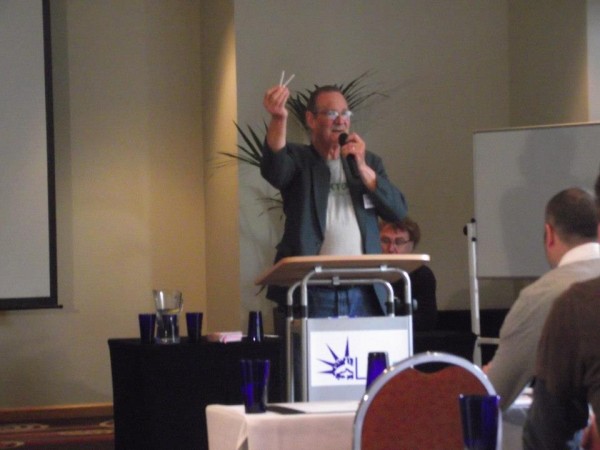 Dakta Green recieved a standing ovation for his speech and activism for freedom and Justice in regards to ending cannabis Prohibition.
He spoke about his experiences as a political prisoner, and the fact that he faces yet another stint in Jail because of his refusal to be broken and ‘Living like it’s Legal’.

Last Saturday (6-10-12) I attended the Liberty Conference in Auckland, convened by the Libertarianz Party for the propose of considering the best possible ways of furthering the cause of Liberty in New Zealand, and in particular to formulate a new strategy for getting Freedom loving Advocates into Parliament.
The Libertarianz were facing up to the Sad reality that their Party had failed to attract anywhere near enough support to make it an effective political player.

My personal opinion is that the Libertarianz party did many things wrong… many mistakes hurt the parties chances of gaining a more popular base, yet The Party …morally speaking….also did many things right… which also had a detrimental effect upon it’s popularity.
Simply put it set about to slay too many sacred cows to be borne by the Superstitious sheeple. 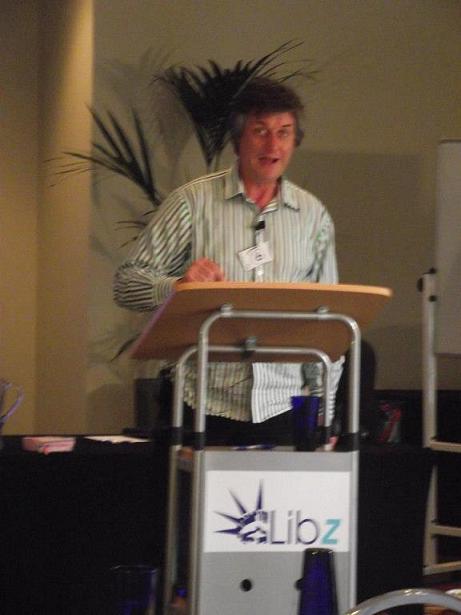 Now Galloping to war with sabers bristling and slashing away was fun indeed, yet such a zealous onslaught spooked the cattle… Peter Cresswell said something to this effect in his speech… and he is right.
This zeal springing from a steadfast rejection of the idea that politics requires compromise… and the conviction that populist politics is the domain of unscrupulous power hungry scum… like Peter Dunne and John Key.

The Hard arse faction within the Libertarianz Party had spent 16 years fending off ‘the soft cocks’… and their desire to water down our message… and though they had prevailed in maintaining the principled integrity of the party (to the limited degree of perfection that it’s Objectivist handicap was capable)… none the less as PC described it… we were trying to eat an elephant in one gulp… The Malicious Press absolutely ostracized us from the public debate, and the fickle and brainwashed Sheeple whom had the misfortune of coming into contact with us… washed their hands of us as if we were an infectious disease. Not even our own families supported us!… yet as rugged individualists we soldiered on alone…being upheld only by the shear faith that we were right, and that we really were the Bearers of the Sacred flame of Liberty… of the Political Holy Grail from which all whom drink behold the secrets of Peace, Civilization, and prosperity!

We Libz still believe this!
We have not given up upon our dream!
Yet we need to rethink how we set about making our vision a reality.
Many suggestions were presented by the various speakers.
A common theme was that We freedom lovers need to stop backstabbing each other and work together as a ‘band of brothers’.
Another suggestion was that we modify how we go about our business… be positive, abandon personal jibes and malice… leave that for the socialist’s…. Lead by example, and master the lost art of persuasion. 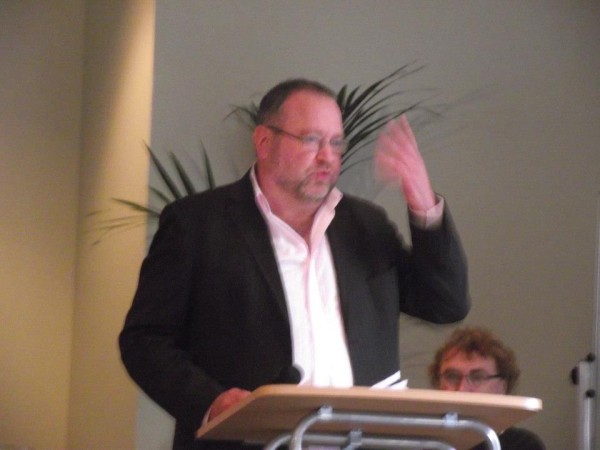 Now these suggestions sound great in theory, yet as the saying goes…you cant teach old dogs new tricks… and I seriously doubt you will be able to tame Rabid Hounds like Lindsay Perigo … whom relishes delivering such judgments as calling John Banks a “Leering Gargoyle!” … and “The Whore of Epsom”… to the Glee and hysteria of almost every Libertarian present (including myself!). Maybe some of the Non-libz found such comments to be in poor taste… Yet my point being that such disregard for pandering to the sensitivities of the wowzers is such a fundamental trait of many of us libz… we sincerely consider it a virtue!
And I wonder whether or not the whole idea of always being positive, and PC, and taking care not to offend… is anything more than weasely Used car salesmanship… and that such an approach is transparently slimy… untrustworthy, and in the end not a solution to the Libz woes at all!
Me thinks That Libertarians ought to be of good character, be tolerant, and well mannered, yet still be Dangerously capable and willing to deliver a well aimed bombardment of Invective when the moment calls for it. I believe this is good/ righteous/ honest politics!
Read Lindsey Perigo’s speech Here:

Peter Cresswell (PC) after diagnosing why the Libertarianz Party has failed, then went on to prescribe the remedies.
Firstly he suggested that instead of trying to eat the tyrannical socialist Elephant whole, that instead we set about consuming the beast… by slicing it up into portions… and devouring it one manageable bite at a time! (Genius!)
PC points out that such an approach does not involve any compromise at all, but in fact takes better cognizance of reality!
Eating the elephant is to be achieved via several different stratagems.
1. via transitional policies which spread the reforms over small steps, with the design of reducing the terror of the sheeple, minimizing the pain of transition, and hopefully gaining popular support as each step proves the reform works.
2. By reducing the Policy focus of the Party down to 5 policies that Polls already suggest have popular support.
This is a strategy which has worked for other minor parties, and the wisdom of it ought to be obvious!
I am very excited about this suggestion!
Personally I believe this to hold real potential for gaining at least 5% of the votes and getting Freedom lovers into parliament.
PC talked about separating the ‘Educational wing’ , from the ‘Party political wing’, by establishing an Independent ‘think tank’ to focus upon the cultural revolution.
Now I am happy about this if it translates into less encroachment of Objectivist dogma into the parties policies. I still have my reservations about what such a think tank would be like, yet I will leave criticism about this for another time. 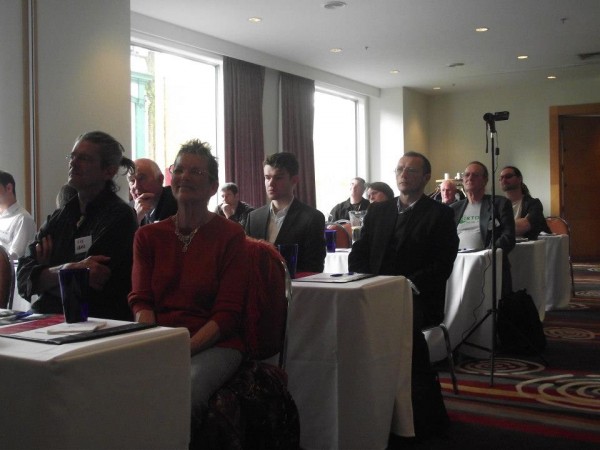 Libz Legend Hooch Hellen, and her son Jay. Behind them is Muso Graham Clark, behind him Dakta Green, Behind Him ‘Eternal Vigilante’ Reed.

By the end of the conference several options for the future were on the table, and it was agreed to form a working group to busy themselves communicating with other parties and putting together a presentation of what options were possible, and the pro’s and con’s of each option, to be put to the vote when all interested parties convene again in the new year to make a resolution for the future.
The options were.
1. Dissolve the Libertarianz party and form a New Party with founding members from the dissolved libz, and Ex members of Act, and ex members of Aeotearoa decriminalize Cannabis party, and others. To do this would require the formulation of the ‘Five policies’ which would have an overlapping consensus between the various factions whom would unite as one.
2. Should the other parties prefer it… Maintain the Libertarianz party as a going concern, yet enter an agreement with the other parties (Like the ALPC) to form a coalition for a united challenge at elections. The terms and conditions, and the five policies would have to be agreed upon for this coalition to work, and the Libertarianz party may or may not re-brand itself, and modify its policies to the new strategy.
3. If no consensus of cooperation can be reached with Act, ALPC, True Liberals, etc then the Libertarianz party could continue to exist, yet implement the new strategy, and re-brand when a worthy Brand and logo can be agreed upon.
This requires the formulation of the five policies, and the creation of a Good brand and logo.

PC suggested for the five policies.
1. Tax reform…
2. Balance the budget
3. Legalize Cannabis
4. Legalize Euthanasia
5. End Waitangi Apartheid. One law for all. Get rid of the separate electoral rolls and racist seats, laws, and institutions.
He suggested these because they were both principled and already have popular support amongst the NZ people.

Now these are not written in stone, and vigorous debate and dialogue needs to take place… and options be prepared before the 2-2-13 conference.

Another benefit of picking the policies wisely is that there may be existing politicians and celebrities whom may wish to join us, and this would increase our chances of success.

There was heaps more than this said. The speeches were excellent.
Yet this will suffice for now.
Much discussion at the conference was in regard to Local body politics, including several fantastic speeches… one by NZ sporting Legend and Super city councilor Dick Quax.
Because I have much to report on this aspect of the conference, I will leave it for my next blog post! Say tuned folks!
Tim Wikiriwhi.
For More Pics go here: