There’s a quotation doing the atheist rounds. It is purportedly due to someone called Stephen F. Roberts.

I contend that we are both atheists. I just believe in one fewer god than you do.

I contend that we are both monotheists. I just believe in one more god than he does.

In an article in the New Statesman, Ciarán Hanway explains that he’s not a man of faith … he’s an atheist. The article is titled I believe in one less god than monotheists…. Hanway explains

Let’s start with the basics. What does “Atheism” mean? It’s a word derived from the Greek word “theos”, meaning “God”, and the prefix “a-“, meaning “without”. An atheist is someone without a belief in god. It is as simple as that. Nothing more, nothing less. It is not a belief system that tells me how to behave or what to eat. It is a simple statement of my lack of belief in God. I could be a fascist, a communist, a monetarist, a narcissist. 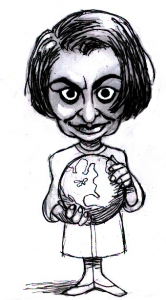 Monotheists reject all other gods but their own. I just happen to believe in one less god than they do.

I leave it as an exercise for the Objectivist reader to identify the flaw(s) in my argument.

One thought on “Was Ayn Rand a Satanist?”