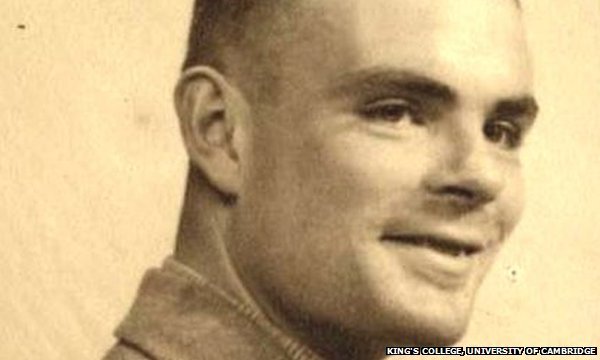 If you’ve done a Google search today, you probably noticed that it’s Alan Turing’s 100th birthday. Who was Alan Turing and why am I paying tribute to him?

Why I like Turing … from the Stanford Encyclopedia of Philosophy

Alan Turing (1912–1954) never described himself as a philosopher, but his 1950 paper “Computing Machinery and Intelligence” is one of the most frequently cited in modern philosophical literature. It gave a fresh approach to the traditional mind-body problem, by relating it to the mathematical concept of computability he himself had introduced in his 1936–7 paper “On computable numbers, with an application to the Entscheidungsproblem.” His work can be regarded as the foundation of computer science and of the artificial intelligence program.

Here’s British Prime Minister (in 2009) Gordon Brown to tell you a few other things you need to know about Turing. (Thanks to Ian Watson for the transcript of Brown’s apology.)

This has been a year of deep reflection – a chance for Britain, as a nation, to commemorate the profound debts we owe to those who came before. A unique combination of anniversaries and events have stirred in us that sense of pride and gratitude that characterise the British experience. Earlier this year, I stood with Presidents Sarkozy and Obama to honour the service and the sacrifice of the heroes who stormed the beaches of Normandy 65 years ago. And just last week, we marked the 70 years which have passed since the British government declared its willingness to take up arms against fascism and declared the outbreak of the Second World War.

So I am both pleased and proud that thanks to a coalition of computer scientists, historians and LGBT (lesbian, gay, bisexual and transgender) activists, we have this year a chance to mark and celebrate another contribution to Britain’s fight against the darkness of dictatorship: that of code-breaker Alan Turing.

Turing was a quite brilliant mathematician, most famous for his work on the German Enigma codes. It is no exaggeration to say that, without his outstanding contribution, the history of the Second World War could have been very different. He truly was one of those individuals we can point to whose unique contribution helped to turn the tide of war. The debt of gratitude he is owed makes it all the more horrifying, therefore, that he was treated so inhumanely.

In 1952, he was convicted of “gross indecency” – in effect, tried for being gay. His sentence – and he was faced with the miserable choice of this or prison – was chemical castration by a series of injections of female hormones. He took his own life just two years later.

Thousands of people have come together to demand justice for Alan Turing and recognition of the appalling way he was treated. While Turing was dealt with under the law of the time, and we can’t put the clock back, his treatment was of course utterly unfair, and I am pleased to have the chance to say how deeply sorry I am and we all are for what happened to him. Alan and so many thousands of other gay men who were convicted, as he was convicted, under homophobic laws, were treated terribly. Over the years, millions more lived in fear of conviction. I am proud that those days are gone and that in the past 12 years this Government has done so much to make life fairer and more equal for our LGBT community. This recognition of Alan’s status as one of Britain’s most famous victims of homophobia is another step towards equality, and long overdue.

But even more than that, Alan deserves recognition for this contribution to humankind. For those of us born after 1945, into a Europe which is united, democratic and at peace, it is hard to imagine that our continent was once the theatre of mankind’s darkest hour. It is difficult to believe that in living memory, people could become so consumed by hate – by anti-Semitism, by homophobia, by xenophobia and other murderous prejudices – that the gas chambers and crematoria became a piece of the European landscape as surely as the galleries and universities and concert halls which had marked out European civilisation for hundreds of years.

It is thanks to men and women who were totally committed to fighting fascism, people like Alan Turing, that the horrors of the Holocaust and of total war are part of Europe’s history and not Europe’s present. So on behalf of the British government, and all those who live freely thanks to Alan’s work, I am very proud to say: we’re sorry. You deserved so much better.

Turing was found dead on 7 June 1954, two weeks before his 42nd birthday, after biting into a cyanide-laced apple. Wikipedia notes that

The logo of Apple Computer is often erroneously referred to as a tribute to Alan Turing, with the bite mark a reference to his method of suicide. Both the designer of the logo and the company deny that there is any homage to Turing in the design of the logo. In Series I, Episode 13 of the British television quiz show QI presenter Stephen Fry recounted a conversation had with Steve Jobs, saying that Jobs’ response was, “It isn’t true, but God, we wish it were.”

Turing’s work is the foundation of computer science and of research into artificial intelligence. Turing is responsible for the Turing Test (the CAPTCHA‘s big brother), the Turing Machine and (jointly with Alonzo Church) the Church-Turing thesis.

Here’s a Turing Machine built of Lego. (Are you Lego or Logos?)

This simple machine can, given a long enough ticker tape, do anything your mind can do—and much more. It’s humbling for some to realise that the human mind is the biological equivalent of a read-write head, a binary internal state, a look-up table and a ticker tape. But that’s all anyone ever is—biological ticker tape. (In fact, we’re all world lines.)