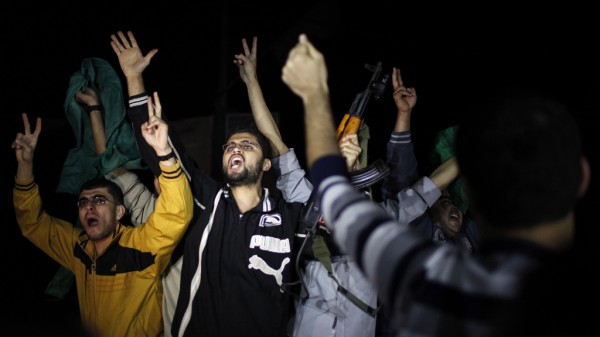 With gunshots, sweets and cries of victory, Palestinians in the Gaza Strip poured into the streets to celebrate a ceasefire deal on Wednesday which ended eight days of deadly fighting between Israel and Islamist militants.

After being stuck at home for days for fear of Israeli air strikes, tens of thousands of Palestinians crowded into cars and doubled up on motorcycles, waving flags and chanting for Hamas, Israel’s main adversary and rulers of the Gaza Strip.

Women leaned over balconies ululating with joy as children stuffed four-abreast in the open trunks of cars clapped and sent out hoarse screams of “God is Great!”.

“We feel like we’ve gotten our freedom back, our lives back. Thank God for Hamas, and thank God for the patience and strength of the Palestinian people in humbling Israel,” said Mohammed Skeik, marching with a pack of fist-pumping friends.

The Egyptian-brokered ceasefire put an end to Israeli air raids which bombed hundreds of Hamas targets and the firing of more than 2,000 rockets and mortar bombs by Hamas and other factions into Israeli cities, including Tel Aviv and Jerusalem.

In all, 162 Palestinians, including 37 children and 11 women, were killed in the offensive, along with three Israeli civilians and a soldier.

Firing a deafening burst from his Kalashnikov rifle, Mohammed al-Ghazaleh boasted: “(Israeli Prime Minister) Netanyahu will mourn tonight, while the people of Gaza are steadfast in their resistance and have triumphed.”

“Israel won’t think of challenging us like this ever again. We payed a dear price in the blood of our people for their aggression, but we made great gains and showed our strength,” he said.

“PEOPLE OF GAZA, YOU HAVE WON”

Members of Hamas’s top political echelons, also forced to seek shelter during the raids because Israel had them in its sights, joined eagerly in the grandstanding.

“The resistance achieved a historic victory against the occupation and laid the foundation for the battle of liberation for all our land and sacred sites,” said senior Hamas official Ahmed Bahar.

During a lull in fighting eight days ago, Israel launched an offensive by assassinating Hamas’s acting military chief, Ahmed Al-Jaabari, on November 14.

Green banners waving in the night air, Hamas activists from Hamas cried through loudspeakers at the clogged streets, “Oh people of Gaza, you have won.”

One thought on “[The Onion] Victory for Hamas!”