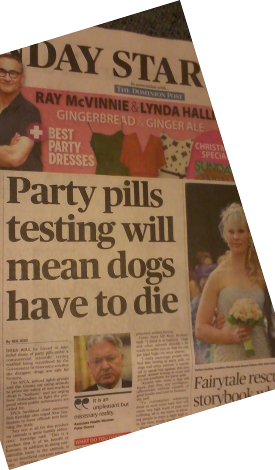 (n) a mentally disturbed, insane, or attention-seaking person that does or says revolting, disgusting, or bizarre things.
OR
a person who says or does twisted or gross things (but is not necessarily insane)

A degenerate lowlife.
A worthless piece of scum that has no boundaries when it comes to seeking pleasure.
A slimebag that is on a mission to reach new lows with every perverted act.
A dirtball who will abuse himself, his family and neighborhood pets to get a thrill.
As a child will display all the traits of a future serial killer.

Party pills testing will mean dogs have to die

Dogs will forced to take lethal doses of party pills under a controversial scientific testing method being considered by the Government to determine whether the designer drugs are safe for humans.

According to a Ministry of Health report – “Regulations governing the control of novel psychoactive drugs” – outlining what testing would be needed under the law change, a designer drug “must” go through pre-clinical animals studies and it is “critical” to show a drug is safe for animals before it can be given to humans.

“At the study’s completion, animals are sacrificed and tissues from all organ systems examined,” the paper said.

Both rats and dogs would be subject to a lethal dose 50 per cent (LD50) test, where doses of the drug increase until half the test group dies. The method is banned in Britain and is not recognised by the OECD.

Associate Health Minister Peter Dunne said that despite a public consultation process, it was “unavoidable” that party pills would be tested on animals – including dogs.

“The Government is committed to minimal use of animal testing, but the hard truth is that scientifically, animal testing is unavoidable to prove that products are safe for human beings,” Dunne told the Star-Times. “It is an unpleasant but necessary reality. 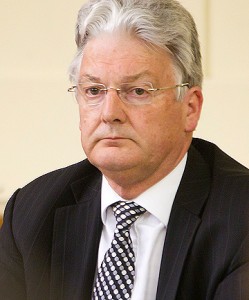 Green Party MP Mojo Mathers said: “I think it is barbaric. Dogs and other animals shouldn’t be made to suffer just so that we can get legal highs on store shelves.

“I really encourage people who feel that testing of party pills on dogs and other animals is unethical to speak out against this proposal. Animal testing is cruel and it’s not justifiable for party pills.

“Anyone who owns a dog will know that they are intelligent, affectionate animals capable of great loyalty and trust to humans,” she said.

“To contemplate subjecting them to such cruel tests that will cause very high levels of pain and suffering, all in the name of allowing people to have a legal high is, in my view, totally unethical.”

Now for the backdown—which, really, only makes things look worse for the unpleasant and unnecessary Peter Dunne.

Dunne backs down on party pill testing deaths for dogs

LATEST: Peter Dunne has ruled out using a “barbaric and disgusting” method which would force animals to take lethal doses of party pills to ensure they’re safe for human use.

Both rats and dogs would be subject to a lethal dose 50 per cent (LD50) test, where doses of the drug increase until half the test group dies. The method is banned in Britain and is not recognised by the OECD.

The Associate Health Minister initially told the Sunday Star-Times it was “unavoidable” that party pills would be tested on animals, including dogs.

But he confirmed today the LD50 test would not be used, labelling it “barbaric and disgusting”

Funny how something that is “necessary” and “unavoidable” can suddenly be labelled “barbaric and disgusting” and be “ruled out” within hours of a headline that’s a bad look for the Associate Minister of Health.

The only thing that would-be dog poisoner Peter Dunne really thinks is necessary is his re-election.

Just legalise recreational drugs, Peter Dunne—starting with cannabis. This miracle herb has already been fully tested by humans and guess what? No one has ever died from a cannabis overdose. No LD50 has ever been established.

8 thoughts on “Peter Dunne is a sick puppy”