This was on the front page of the Dominion Post today. 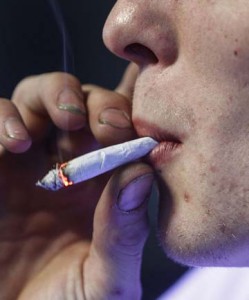 Hundreds of people are locked up for petty drug offences every year – many for crimes our top legal body says should not exist.

Justice Ministry figures show a significant amount of court time is taken up by minor drug cases, with nearly as many people imprisoned for possessing a small quantity of cannabis as for dealing.

Among these offenders are hundreds imprisoned for possessing a pipe or a needle, an offence the Law Commission recommended legalising last year.

The figures also show fewer than one in three minor drug offenders is offered diversion, allowing them to avoid a criminal record.

The New Zealand Drug Foundation said the figures were alarming and showed the court-focused treatment of minor offenders was not working.

But Justice Minister Judith Collins said all drug offending – no matter how minor – should be dealt with through the criminal justice system.

In the past six years, possession of small amounts of cannabis or smoking utensils, such as a pipe, made up about half of all drug charges laid by police.

While most offenders received a fine or community work, more than 2800 were imprisoned on minor drug offences.

These included possession of needles, pipes, and small amounts of cannabis or methamphetamine.

“You send someone away for a minor drug conviction and they can come out a meth cook,” he said.

Rather than dealing with people through the criminal justice system, the Government could introduce a mandatory cautioning scheme, he said.

“For a drug like cannabis you could get three cautions before being diverted to a treatment programme. We are not talking about decriminalising or legalising, it’s about a more pragmatic way to get help for people that need it.”

However, Ms Collins said the justice system was the right place for all drug offenders.

The Government had policies to ensure anyone requiring drug treatment received it, she said.

It also recommended a three-strike system for minor offending, and legalising pipes and needles.

Police opposed most recommendations – including legalising pipes and needles. The Government has followed up only on a handful, notably introducing drug courts. However, the figures show the police may have started to treat minor drug offenders less aggressively.

In the year to June 2012, there was a substantial drop in the number of people being charged, convicted and imprisoned for possession of utensils.

Police said that the drop could be attributed to the introduction of a pre-charge warning in September 2010.

The move gave police discretion to warn rather than charge people arrested on offences carrying a sentence of six months or less imprisonment.

The warnings are not available to people caught with methamphetamine.

Police say people charged with drug possession are likely to get diversion, particularly on a first offence, but ministry figures show minor drug charges usually result in a conviction.

How New Zealand has treated minor drug offenders over the past six years:

Maximum penalty: 3 months in prison and/or a $500 fine

Maximum penalty: A year in prison and/or $500 fine

Maximum penalty: A year in prison and/or a $500 fine

I didn’t know this happened in New Zealand. 🙁

Does it?! (Where did these figures come from? Can anyone vouch for them?)