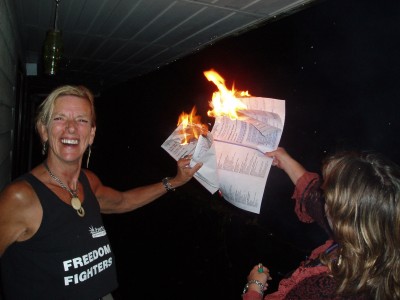 Libertarianz Northland coordinator Helen Hughes. Photo / John Stone A political party is urging people opposed to the “coercive nature” of the Census to take part in mass civil disobedience and destroy their Census forms in protest.

But anybody who takes the advice of the Libertarianz Party to indulge in “burning, shredding, defacing or ignoring” the Census form sent out by Statistics NZ could find themselves facing a $500 fine, with another $20 for each day they fail to comply.

Libertarianz Northland coordinator Helen Hughes will be holding a party on Census day – March 5 – to “responsibly” destroy her form with others opposed to the information gathering exercise.

Ms Hughes admits it’s exhorting people to take part in a mass form of civil disobedience, but said many didn’t like the intrusive nature of the Census and don’t trust the Government.

“Nobody should destroy their [Census] forms unless they know what they are protesting against. Yes, it’s urging people to break the law, but when the law is wrong then protest is absolutely necessary.”

She said she and the party were opposed to more government intervention and saw the Census as a benign way of brainwashing people into giving up private information.

Related Blogpost…. The Census. Are you really free?

The census is a rediculously expensive waste of Taxpayer money!
Read about it here: