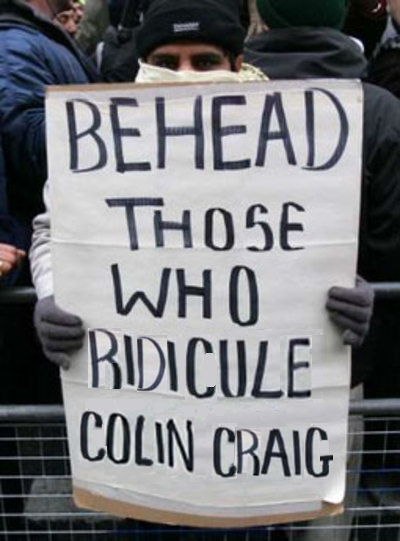 Let’s be clear (in case any of Colin’s supporters are reading this). I am NOT calling for the beheading of those who ridicule Colin Craig. This is satire.

Freedom of speech is the bedrock of our democracy. Any attempt to stifle free speech, whether by threats of beheading or threats of legal action, must be nipped in the bud early. It is a relief to read that Colin Craig abandons defamation suit. But he should never have threatened The Civilian in the first place. That he did shows contempt for the most basic of our Western values. 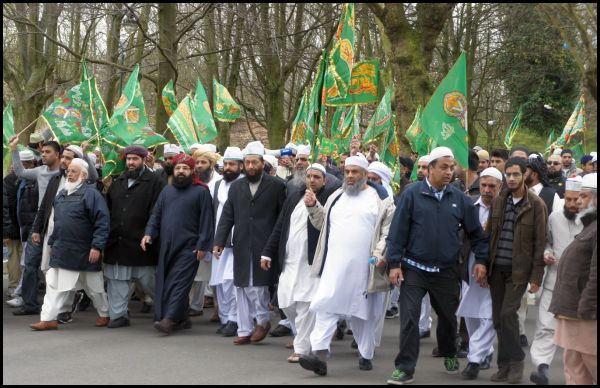 Meanwhile, 25,000 Muslims March in England Calling for Laws to Silence Critics of Islam.

Up to 25,000 British Pakistani men, women and children from across the UK gathered in Aston Park to call on the British government to introduce legislation that bars people from insulting Islam under the garb of the freedom of speech.

The participants, who also travelled from several parts of European cities, were led in a mile-long march by Hazrat Peer Alauddin Siddiqui. This is the fourth consecutive gathering for the biggest Melaad-un-Nabi of British Pakistanis in Britain but this year it was dedicated to “protect the honor and legacy of Hazrat Muhammad”.

“To say Islamic terrorists represent the Muslim religion,” says this meme, “is like saying the Ku Klux Klan represents the Christian religion.” But this misses the point. Islamic terrorists are NOT a minority of Muslims. There’s at least 25,000 living in the UK and openly seeking to subvert freedom of speech under the guise of a ban on insulting their evil politico-religious ideology!

Restrictions on Islamic immigration must be put in place now before it is too late. It’s a numbers game. 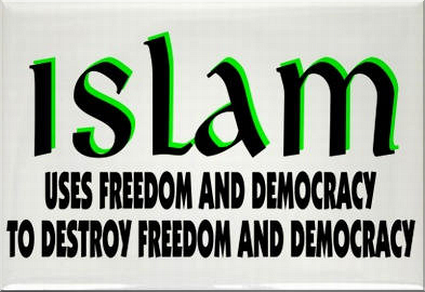 5 thoughts on “Behead those who ridicule Colin Craig!”