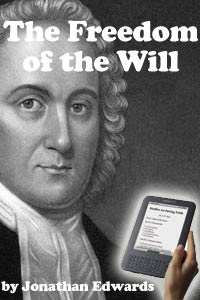 The plain and obvious meaning of the words Freedom and Liberty, in common speech, is The power, opportunity, or advantage, that any one has, to do as he pleases. Or in other words, his being free from hindrance or impediment in the way of doing, or conducting in any respect, as he wills. — And the contrary to Liberty, whatever name we call that by, is a person’s being hindered or unable to conduct as he will, or being necessitated to do otherwise.

If this which I have mentioned be the meaning of the word Liberty, in the ordinary use of language; as I trust that none that has ever learned to talk, and is unprejudiced, will deny; then it will follow, that in propriety of speech, neither Liberty, nor its contrary, can properly be ascribed to any being or thing, but that which has such a faculty, power or property, as is called will. For that which is possessed of no will, cannot have any power or opportunity of doing according to its will, nor be necessitated to act contrary to its will, nor be restrained from acting agreeably to it. And therefore to talk of Liberty, or the contrary, as belonging to the very Will itself, is not to speak good sense; if we judge of sense, and nonsense, by the original and proper signification of words.— For the Will itself is not an Agent that has a will: the power of choosing, itself, has not a power of choosing. That which has the power of volition is the man, or the soul, and not the power of volition itself. And he that has the Liberty of doing according to his will, is the Agent who is possessed of the Will; and not the Will which he is possessed of. We say with propriety, that a bird let loose has power and liberty to fly; but not that the bird’s power of flying has a power and Liberty of flying. To be free is the property of an Agent, who is possessed of powers and faculties, as much as to be cunning, valiant, bountiful, or zealous. But these qualities are the properties of persons; and not the properties of properties.

There are two things contrary to what is called Liberty in common speech. One is constraint; otherwise called force, compulsion, and coaction; which is a person’s being necessitated to do a thing contrary to his will. The other is restraint; which is, his being hindered, and not having power to do according to his will. But that which has no will, cannot be the subject of these things.— I need say the less on this bead, Mr. Locke having set the same thing forth, with so great clearness, in his Essay on the Human Understanding.

But one thing more I would observe concerning what is vulgarly called Liberty; namely, that power and opportunity for one to do and conduct as he will, or according to his choice, is all that is meant by it; without taking into the meaning of the word, any thing of the cause of that choice; or at all considering how the person came to have such a volition; whether it was caused by some external motive, or internal habitual bias; whether it was determined by some internal antecedent volition, or whether it happened without a cause; whether it was necessarily connected with something foregoing, or not connected. Let the person come by his choice any how, yet, if he is able, and there is nothing in the way to hinder his pursuing and executing his will, the man is perfectly free, according to, the primary and common notion of freedom.

Are you up for A Careful And Strict Inquiry Into The Modern Prevailing Notions Of That FREEDOM OF WILL Which Is Supposed To Be Essential To Moral Agency, Virtue And Vice, Reward And Punishment, Praise And Blame? Then feel free to come join us at the next meeting of the New Inklings. (Tuesday 30 April, 5:00 pm, Trax Bar and Cafe, Platform 1, Wellington Railway Station.)

22 thoughts on “Concerning the notion of Liberty, and of moral Agency.”