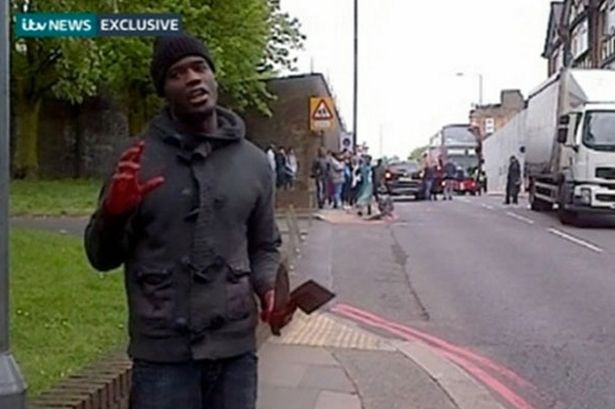 The “Religion of Peace” has struck again in a barbaric execution on a busy London street in broad daylight.

To prevent this from happening again we must consider root causes. What are they?

Or in the perpetrator’s own words

The only reason we have killed this man today is because Muslims are dying daily by British soldiers. And this British soldier is one, it is eye for an eye, and a tooth for a tooth.

By Allah, we swear by the almighty Allah, we will never stop fighting you until you leave us alone.

So what if we want to live by the Sharia in Muslim lands, why does that mean you must kill us and chase us … in suicide, kill us?

Rather, you are extreme. When you drop a bomb do you think it kills one person or, rather, your bomb wipes out a whole family? This is the reality.

And by the way, if I saw your mother today with a buggy I would help her up the stairs. This is my nature.

But we are forced by the Koran […] Many, many ayah throughout the Koran [say that] we must fight them as they fight us, an eye for an eye, and a tooth for a tooth.

I apologise that women had to witness this today, but in our lands our women have to see the same. You people will never be safe.

Remove your government, they don’t care about you. You think David Cameron is going to get caught in the street when we start busting our guns? You think your politicians are going to die? No it’s going to be the average guy, like you, and your children. So get rid of them. Tell them to bring our troops back so we can … you can all live in peace. Leave our lands and you will live in peace.

That’s all I have to say.

I have two suggestions for the West.

(1) We put a moratorium on Muslim immigration until further notice.
(2) We withdraw all troops from Muslim lands.

That’ll fix the problem in no time.

30 thoughts on “Careful with that meat cleaver, Michael”