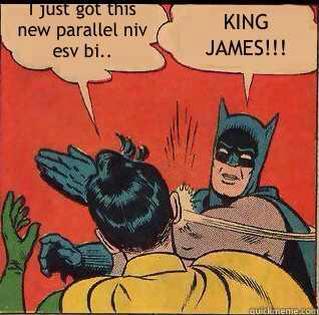 When I was convinced to convert from Atheism to Christianity… 29 years ago, a most vital part of my conversion was the fact that the Christians whom shared with me their faith in Christ were King James Bible believers, and they were able to convince me of the trustworthiness of the Bible as Gods Divine revelation to mankind.

Now I was an Ignorant Atheist Evolutionist Nihilist Bogan West Aucklander who worshipped Jim Morrison.
I was Militantly Atheistic, and believed that people who believed in ‘The Big Man up in the Clouds’ were Bat shit Crazy (like my Mom!)
I would rip into them!
I would Mock them!
I would roll around on the ground in a fit of hysterics at the very thought that People could be so stupid as to really believe in Miracles, Heaven, etc.
Didn’t they Know that Science had proven that We came from Monkeys????
Didn’t they know that only Children, and Primitive Savages believed in Ghosts, Boogie Men, Angels, Fairies, God, Santa, etc ????
This clearly meant that the Bible was complete Bullshit!
It was written by Ignorant superstitious savages…before the Advent of science.
And The fact that there were many Bibles also further proved that it had been altered with the process of Time.
Everybody knew the Bible was full of Superstition, and contradictions (though I had never read it).
And Like our society, It was filled with Man made customs and rules which in reality were not binding upon anyone… *only Chumps believed morality was real!*
I ‘Knew’ reality was Materialistic, and that there was no Heaven for the Good, no hell for the wicked, and that all the rules of society were simply ‘Made up’…. and believed by slaves and Idiots.
I was Free!
I ‘knew’ There was no ‘Right or wrong’ in Atoms or the Periodic Table.
I ‘knew’ there was no Divine judge… no Divine Lawgiver….nothing out there but empty space… and a lot of fear ridden Idiots whom wasted their lives worshipping Fake Gods.

This was the Package Deal I called my Atheist/ scientific/ worldview.
And it was this entire Package which had to be confronted and overthrown if I was to become an honest believer In Jesus Christ.

It was quite amazing that circumstances arose that I actually gave one particular Christian opportunity to present his case for belief in God, and a vital part of his case was that Mankind had been ‘Visited’ by God and that he had given us his word, and preserved it, and that it was trustworthy, and ought to be believed.

Had he not presented his faith as standing upon such an absolutely trustworthy foundation I would have immediately said to myself that even the Christians themselves know the Bible if full of errors.
Ie That they admit the Atheist position is Valid, and I would have rejected Christianity upon that basis alone. Ie The Bible can not be relied upon. End of story.

Amazing enough… though the belief that the Bible is ‘untrustworthy’ is held by the Majority of so-called Christians today… God instead sent a Bible believer across my path, and It was via a systematic process of convincing me the Bible was indeed trustworthy, and that the Christian cosmology, and explanation of what Humanity really is, is vastly superior and more scientifically and historically accurate than my previous Naturalistic Materialist cosmology, that one day I saw the light!
‘One evening… after many months of Conversations, etc… in my mind it was like a whole cascade of pieces of a jigsaw puzzle all simply fell into place, and I could see what this Christian had been saying made perfect sense!
I began to be able to feed scenarios into this new cosmology and it would spit out ‘answers which added up perfectly with reality!
It’s explanitory power was immense!
And so I decided I would ask Jesus Christ to be my savior… and I was so convinced of his reality that I was kinda surprised no Angel turned up and shook my hand and gave me a Job from God to do! 🙂

I was a changed Man.
I became a religious fanatic… much to the surprise of my Family and friends…esp to my Mother, brother, and sister whom I had always mocked for believing in God!
It was a *real Miracle*!

To this day I believe it was in answer to my mothers prayers, and God’s plan for my life, that he sent his Bible believing servants to preach to me the gosple, with a powerful enough foundation to undo my Infidelity.
I have spent the last 30 years of my life…through Highs and Lows… putting the King James Bible to the test.
I have subjected it to every criticism that the doubters have been able to throw at it… and like a house built upon the Rock…. though the Tempest rages… It standeth sure!
I simply cannot understand how someone can claim to be a Christian yet doubt the trustworthiness of the Bible!…. yet Millions do just that!
And they stand with the atheists attacking my faith in the King James Bible!

Let me say that when I preach the gospel to others, I preach it from full conviction that It is *the Gospel truth*.
That it really is what God says a man must believe to be saved.
And when I call unbelievers to ‘wake up’ that I really have something far superior to show them.
And when I go about my Libertarian activism, it is based upon an absolute conviction that Morality is Objective… that God did create Man equal, and endowed him with certain inalienable rights, and that to secure those rights Governments are instituted among men…

I believe that when an English speaking person stands before God, that he will be judged in accordance with the KJV. Ie God will hold us accountible by It, and our access to it.
We have no excuse.
Those whom a planning to tell God that they did’nt believe the gospel because the Bible was untrustworthy and full of errors will be in for a shock!
They will be found naked, and guilty, and shall be judged… because they chose to reject Christ and the love and Grace of God.

I must go to bed now.
To be continued!…
I will get into particular reasons *why I maintain my belief in The 1611 King James Bible.

More from Tim… Death of an Atheist. Follow the evidence.

6 thoughts on “Do you believe you have the Perfect Word of God? Theism vs Humanistic Rationalism. Seeing The Light! My Testimony.”