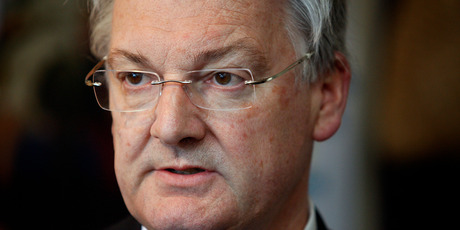 Peter Dunne was, until recently, the Minister of Revenue and Associate Minister of Health. He remains in Parliament as leader and sole MP of the ailing United Future Party.

Graham McCready is a retired accountant and Wellingtonian.

Mr McCready is currently taking a private prosecution against John Banks, alleging he knowingly filed a false electoral return over $50,000 in donations from internet tycoon Kim Dotcom in his failed 2010 Auckland mayoral campaign.

He also prosecuted Labour MP Trevor Mallard in 2007 over a stoush with National MP Tau Henare.

Mr Banks denies the charged while Mr Mallard pleaded guilty to fighting in public and was fined $500.

Mr McCready said he was prosecuting Mr Dunne “to take on these wayward people”.

All strength to McCready.

Three of the charges relate to the GCSB scandal, over which Dunne was forced to resign his ministerial positions. They allege breaches against the Crimes Act, but it’s the fourth charge of alleged fraud in particular that I hope succeeds.

Mr McCready told NZ Newswire Mr Dunne continued to receive parliamentary funding of $100,000 a year, despite knowing United Future didn’t have enough members to be registered as a political party by the Electoral Commission.

Specifically, McCready has accused Mr Dunne of fraud by receiving $3846.10 between 30 April and 1 June as a fortnightly instalment of his $100,000 payment as a leader of a registered political party. McCready issued a statement saying

Mr Dunne finds himself in the same position as a welfare beneficiary who has had a substantial change of circumstances, takes no steps to alert WINZ of the change and continues to receive the money when he has no ‘colour of right’ to receive it.

Nor did he take any steps to return the money or hold it in trust.

Is he immune from prosecution? If I don’t advise WINZ of a change in my circumstances they would come after me. Why shouldn’t they go after Dunne?

The analogy holds good, but Dunne’s offending is (at least) an order of magnitude worse for the simple fact that Dunne is (or, thankfully, was) a government minister not a WINZ beneficiary.

Dunne saw fit to “take liberties” with the Parliamentary rules. He granted himself some “leeway” in the uncertain hope that he could persuade enough people to sign up and restore his party’s membership to the minimum of 500 required to stay registered.

It’s a very fine line indeed between Dunne’s behaviour and corruption. So blurry, in fact, that I can’t see it. Corruption in government and officialdom is an insidious evil that must be stamped out.

In most of the African continent corruption is rife at all levels of government. I submit that such corruption is the #1 reason that Africa (e.g.) remains the impoverished shithole that it mostly is. Feel free to challenge me on this, but in my view Graham McCready is a hero and we all owe him a debt of gratitude for seeking to nip this bad behavior in the bud.

One thought on “Are we Dunne yet?”