Just before Christmas, Associate Health Minister Jim Anderton announced an impending ban on “party pills”. A report by the Expert Advisory Committee on Drugs had found that BZP poses a “moderate risk of harm”. He announced that he would be consulting the “wider community” before making a final recommendation to Parliament.

I’m part of that wider community. I use BZP now and then to help relieve mental fatigue, drowsiness and general inertia. It keeps me bright and alert. So I dream that one day soon I’ll get my phone call from Jim Anderton. “Hi Richard, it’s Jim. Look, I’m thinking of banning BZP. You’re on my list of several hundred thousand New Zealanders who use BZP. As a BZP user, you’ll be one of the people most affected by a ban. So, the question I want to ask about BZP is, do you mind if I go ahead and ban it?”

Yes, Jim, I do mind. But, of course, it’s not all about me. According to the latest research from Massey University’s SHORE, 1 in 5 NZers (aged 13 to 45) have used BZP-based party pills – that’s about half a million adults. A BZP ban will deprive hundreds of thousands of NZers of enjoyment. And enjoyment is, after all, one of the things that makes life worth living. But, funnily enough, fun isn’t mentioned once in the EACD’s report to the Minister.

The government still believes in the Myth of Prohibition – that by banning a drug, you can stop drug use. You can’t. Ban party pills, and the number of people using party pills will most probably decrease, yes. But former party pill users will simply get high on something else. Many will revert to using already illegal party drugs like methamphetamine (“P”) and ecstasy – the “party pills” will simply become more expensive, more fun, and more dangerous than before.

Imagine the advent of a new designer drug, whose effects are exactly the same as alcohol’s, but which doesn’t cause liver cirrhosis or hangovers. Would the government allow it to stay legal? It would not. The EACD would find that the drug posed a serious risk of harm – because of violence, accidents and dangerous driving, and the drug’s insidious effects on almost every other organ. Accordingly, it would recommend to the Minister that the new drug be banned by classifying it as Class B (or even Class A – alcohol can be very nasty) in the schedules to the Misuse of Drugs Act. But, surely, if the government is at all interested in “harm minimisation” (which is, after all, its official policy), it would actively encourage the substitution of alcohol for the new ‘alcohol-lite’ designer drug with a view to eventual complete displacement.

Now consider BZP. Its effects are quite different to alcohol’s, but also much more benign. For example, BZP is on the World Anti-Doping Agency’s banned drug list because it is a performance-enhancing drug. By contrast, alcohol is notorious for being performance-impairing (on the road, in the bedroom, indeed, everywhere).

Under existing law, discerning drug users are denied the option of using numerous illegal but safer alternatives to our most popular recreational drug, alcohol, which causes more hospitalisation and death than all illicit drugs combined. And, to add insult to injury, we are denied the benefits of research and development into more effective and safer recreational drugs. Who would bother to invest in such research if, as is threatened to happen in the present case of the industry body STANZ and “party pills”, the fruits of such efforts are immediately banned?

The Libertarianz Party strives for a future New Zealand in which Nanny State no longer coddles and chastises us at every turn. We envision a New Zealand in which parents exercise authority over their children, and adults are free to do as they please, so long as they respect other people’s freedoms and take full responsibility for the consequences of their own actions. In such a libertarian utopia, there will simply be no need for legislation banning things which have a “moderate potential for harm”. Parents will see to it that their children stay out of harm’s way, adults will take responsibility for their own welfare, and the government will not waste your money on futile efforts to stem the tide of human nature. Ultimately, we would repeal the Misuse of Drugs Act. Meanwhile, the Libertarianz Party has a transitional drugs policy: to legalise all drugs safer than alcohol. This policy would result in the legalisation of a surprisingly large number of substances already scheduled in the Misuse of Drugs Act – and all of them safer to take on a night out than a few drinks.

Dr. Richard Goode is a BZP user and the Spokesman on Drugs for the Libertarianz Party. 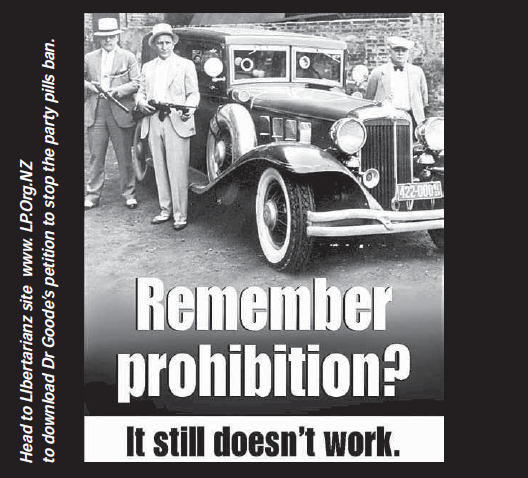 One thought on “Bring back BZP!”