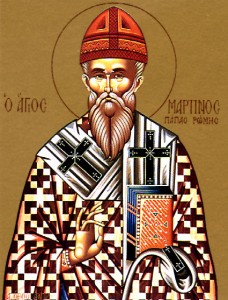 Before Martin Luther King, before Martin Luther, there was Martin, a Saint no less worthy than his progeny in his labour against the zeitgeist.  As hard as it is to believe nowadays, once upon a time, Roman Popes were the last and greatest defenders of Christian Orthodoxy, even when other Bishops and Patriarchs would go wobbly.  Martin is one of the more famous examples of this.  At the time of his accession to the Papal throne in 649AD, much of the Roman Empire, of which he was technically a governor of its Italian territories, had fallen under the rule of an heretical Emperor and Bishops.  The heresy du jour was monothelitism – the idea that Christ had only a single, divine will.  Martin saw this as a great threat to the Church and its doctrine, and argued vigorously in favour of the traditional Orthodox view – that Christ had two wills – a human and a divine, and that to argue otherwise was to either make Him less than human, or less than God.

For daring to defend Orthodoxy, the Emperor attempted to dethrone Martin by charging him with heresy, and when this failed, he had him kidnapped and exiled to the Greek island of Naxos, where he was subject to torture and deprivation.  Eventually he died of starvation, the last Papal martyr of the Church to this day. 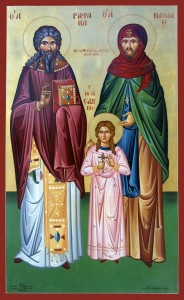 These three Saints were residents of the Greek island of Lesbos during the Turkish conquest of the Roman Empire – Raphael, the Abbot of a local monastery, Nicholas, one of his Deacons, and Irene, the twelve year old daughter of the Mayor.  They were brutally and viciously tortured at the monastery by the Turks – Raphael died after having his jaw sawn off, Nicholas through heart failure after torture, and Irene by being roasted and suffocated in a metal cask.

What makes this story even more interesting, however, is not so much the story of the Saints, but how these three were revealed to the world.  They remained unknown for nearly 500 years until 1959, when Raphael’s relics were uncovered by chance, and the three Saints began to appear to the people of Lesbos.  Soon, all three sets of relics were uncovered, and miracles of healing were reported at their visitation. 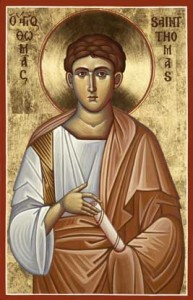 This Sunday, the Sunday after Easter/Pascha is the Sunday of Thomas, the Apostle.  Famed for doubting the resurrection until confronted face to face with Christ, Thomas more than made up for his reluctance in his subsequent preaching of the Gospel.  After persecution broke out against the Christians, he made his way east through Mesopotamia, Parthia, and all the way to India, preaching the Gospel, baptising, and founding churches along the way.  He is said to have met the Magi who were present at Christ’s birth, and finally baptised them.

Settling in India, the Orthodox churches he founded there remains to this day, and he is considered India’s Patron Saint.  It was there where he was martyred by the the local ruler of Melipur, for daring to convert the Prefect’s wife and son.

Orthodox tradition has Thomas being entrusted with Mary’s belt, miraculously offered to him upon her repose, although whether this actually happened or is merely a pious story is debated.