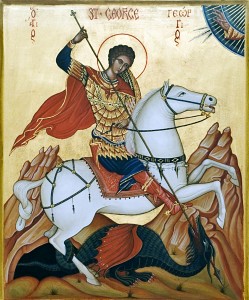 George/Giwargis of Lydda is without doubt one of the most beloved and venerated of all Christian Saints, almost inexplicably so.  Much of this may come from his career as a soldier, rising through the ranks of the Roman army at a young age to become a Tribune, one of the six officers who commanded a Roman legion.  He was a man of great power, valour and standing, which meant that, when the Emperor Diocletian ordered his armies to clamp down on Christians throughout the Empire, George’s refusal, protest, and public declaration of loyalty to Christ before the Emperor was unprecedented.  Diocletian, shocked by this impudence, had George tortured, then decapitated outside the walls of Nicomedia.

Over time, George’s legend grew, and may have spawned, in the spirit of his profession as a soldier, the notion that, in his life and martyrdom, George had done battle with the dragon (ie. the devil) and defeated him.  By the 11th Century, this metaphorical narrative had turned into one in which George had somehow saved a princess and defeated a flesh and blood creature with fire-breath and bat wings.  But no, the Church does not believe in material dragons, only the dragon of old that deceives the nations, and that is what is depicted in icons of George, who now has a country named after him, many British kings, a State of the United States, and is the patron Saint of England, Palestine, and his eponymous Georgia.

Holy George, help us defeat the dragon!  Pray unto God for us! 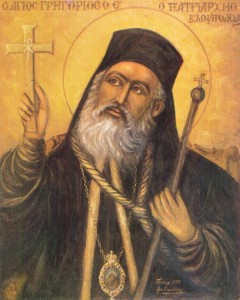 The Ecumenical Patriarch of Constantinople is the first Bishop of the Orthodox Church, or at least has been so since the apostasy of the Bishops of Rome (the Popes) in the 11th Century.  Gregory V had the dreadful misfortune to be the Patriarch during the Greek uprising which was to result in the formation of an independent Greek state.  In retaliation for this, the Sultan decided to execute Gregory, despite the fact that he had, in an effort to protect the Christians in his See, denounced the uprising.  He was seized upon immediately after serving the Easter/Pascha liturgy, taken out to Saint Peter’s gate at the Phanar (the Patriarchal compound), and after the age-old enjoinder to save his life by declaring Mohammed the Prophet of God, and the inevitable refusal, he was hanged there for two days.

One thought on “Saints of the Week (26th April)”