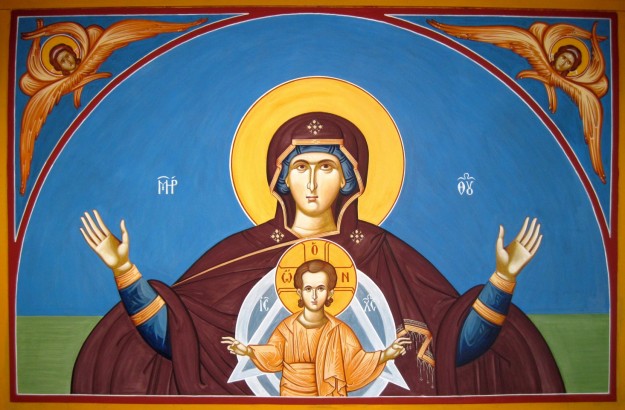 Mary is the greatest mortal being who has ever lived, a model of human perfection that will remain unsurpassed.  To quote the prayer of Saint John Chrysostom, “It is truly meet to bless thee, O Theotokos, who art ever blessed and all blameless, and the mother of our God.  More honourable than the Cherubim, and more glorious beyond compare than the Seraphim, thou who without corruption barest God the Word and art truly Theotokos, we magnify thee!” 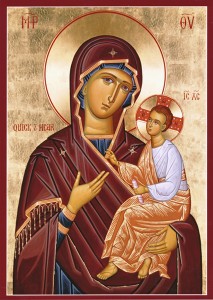 Why is Mary worthy of such accolades?  Because she was found worthy to bear the Son of God, and freely agreed to the task.  Because her virtue never faltered.  Because she carried God inside her body, and was united with Him in communion her whole life without failing.  Because she is the bridge by which God travels to us to save us, the Ark of the New Covenant, the new Mercy Seat, and the new Eve, who restores the communion broken by the old Eve.  She is the greatest of all the Saints, the first of the Christians, the mystical embodiment of Christ’s Church, and through becoming the Mother of God, she becomes our Mother in Christ also.  Giving props to Mary is essential to our Christian walk, and our proclamation and worship of who Christ is, since her role in His incarnation is indispensable.  And with that, as she leads us to her Son, she intercedes for us as a protectress to us all.

For more Mariological reading, here’s a good article on the subject by Fr Peter Gilquist, and here is my own garbled effort.

While there is some detail of Mary in the Gospels (as well as prophecies in the Old Testament, and references in Revelation if you are prepared to look), much of what we know of her life is based on oral Tradition, some of which is detailed in the Apocryphal book The Protoevangelion of James, which, while it is falsely attributed to the first Bishop of Jerusalem, still dates to around 140AD, and is regarded as fairly accurately reflecting the traditional narratives around her.  This narrative tells us that Mary was born in Bethlehem as the only child of two righteous Jews, the elderly Joachim and Anna (though this conception and birth, while miraculous because of their age, was not “immaculate” in the sense promoted by the Latin church).  At the age of three, she was dedicated to serve God in the Temple in Jerusalem, where, to the horror of Zachariah, the High Priest and her uncle, she is supposed to have run into the Most Holy Place and sat on the Mercy Seat!

Having served in the Temple beyond the death of her parents, she reached puberty and thereby became unable to remain in the Temple.  Therefore, someone was required to look after her, and the widower Joseph was chosen by lot to keep her in troth. 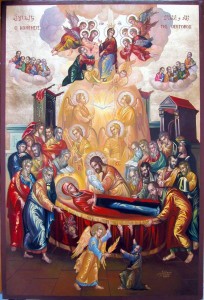 The story of the Nativity should be familiar to most readers.  Despite her marriage, she remained a virgin (as Saint Jerome compellingly argues), and continued to support Christ even in His ministry.  When Christ charged the Apostle John with her care on the Cross, she remained with John as he traveled, living with him in Ephesus for a time.  However, Tradition holds that she later returned to Jerusalem, where the Archangel Gabriel forewarned her of her repose, and the Apostles were all miraculously translated (in the same manner as Phillip the Deacon was in the book of Acts) to her side.  She fell asleep on 15th August, around 48AD, and was entombed next to her parents at Gethsemane.  To this day, the Dormition of the Theotokos is the third most important feast day of the Church, after Pascha (Easter) and the Nativity.

As the story goes, the Apostle Thomas is supposed to have been translated to Jerusalem three days later than the others, and requested to be able to venerate the body.  However, when the tomb was opened, Mary’s body was not there.  The Church believes that her body was assumed to Heaven to be with Christ, as the firstfruits of our own bodily resurrection in Christ.

Most Holy Theotokos, save us!