September is a quiet month in the Church.  Technically it is the start of the new liturgical year, and the two prominent feasts are the Nativity of the Theotokos, and the Elevation of the Holy Cross (in commemoration of the discovery of Christ’s Cross by Saint Helena).  But the following Saints are celebrated this month:

Crowds soon flocked to him, lured by his extreme holiness and lifestyle.  Symeon would have none of it.  He decided to escape them, and climbed up a ruined pillar to live.  Here he remained for many years, a man of humility, and yet one whose advice was sought by Emperors and Kings.

After going to such extremes for Christ for 37 years, he reposed, and was removed from his pillar and buried nearby. 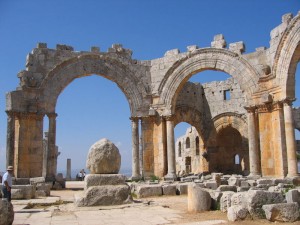 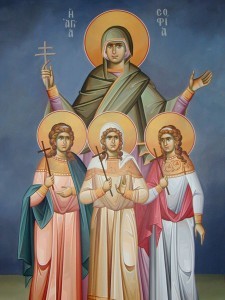 The martyrdom of Sophia and her daughters is one of the most heartwrenching in the whole Church.  The Emperor Hadrian sought the recantation of Sophia, and devised that her three daughters, named for the virtues of the Apostle Paul, should sacrifice to Artemis or be killed so that she might recant.  Her daughters, one by one, were tortured and killed. Sophia herself was not killed, but died of heartache three days later.  It is unimaginable to think what she suffered for Christ.  But now she is glorified, and reigns with Him.