Then Jesus said to the crowds and to his disciples: “The teachers of the law and the Pharisees sit in Moses’ seat. So you must be careful to do everything they tell you. But do not do what they do, for they do not practice what they preach. They tie up heavy, cumbersome loads and put them on other people’s shoulders, but they themselves are not willing to lift a finger to move them.

“Everything they do is done for people to see: They make their phylacteries wide and the tassels on their garments long; they love the place of honor at banquets and the most important seats in the synagogues; they love to be greeted with respect in the marketplaces and to be called ‘Rabbi’ by others. (NIV)

Ayn Rand did not believe her own philosophy. She was smarter than that.

Ayn Rand tied up a heavy, cumbersome load of bollocks and put it on her disciples’ shoulders.

She called it Atlas Shrugged. How’s that for a sense of humour? Wicked. I was wrong.

For God so loved the world that He gave His only begotten Son, that whoever believes in Him should not perish but have everlasting life. (NIV)

God so loved the world that He gave us the gift of Life. The gift that keeps on giving.

Ayn Rand so loved herself that she gave the world the gift of Objectivism. The gift that keeps on taking.

Men have a weapon against you. Reason. So you must be very sure to take it away from them. Cut the props from under it. But be careful. Don’t deny outright, you give your hand away. Don’t say reason is evil – though some have gone that far with astonishing success. Just say that reason is limited. That there’s something above it. What? You don’t have to be too clear about it either. The field is inexhaustible. “Instinct’ – ‘Feeling’ – ‘Revelation’ – ‘Divine Intuition’ – ‘Dialectic Materialism’. If you get caught at some crucial point and somebody tells you that your doctrine doesn’t make sense – you’re ready for him. You tell him there’s something above sense. That here he must not try to think, but to feel He must believe. Suspend reason and you play it deuces wild. Anything goes in any manner you wish whenever you need it. You’ve got him. Can you rule a thinking man? We don’t want any thinking men.

Rand didn’t want any thinking men. Philosophy. Who needs it? Rand didn’t want her disciples needing it or reading it, which is why, on the one hand, she disparaged philosophy and philosphers, especially modern ones, and on the other hand, she exalted herself to the heights of Aristotle and Aquinas. As predicted by the Law of Intended Consequences, Rand’s debased disciples don’t think, they proclaim.

Rand didn’t want any thinking men. She just wanted to be called ‘Rabbi’ by dumbfounded dipshits. She got what she wanted. Good and hard. 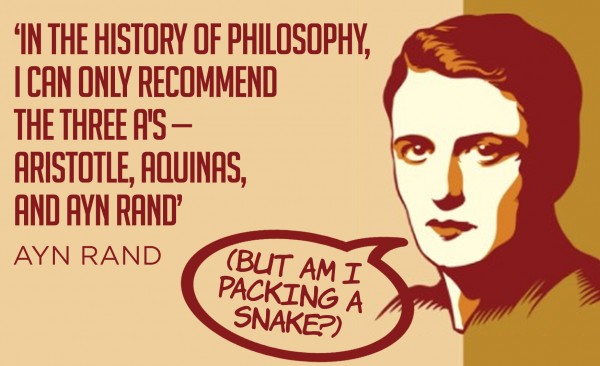 Objectivism is a Trojan Horse. Woe to those who allow it through the gates of their tiny minds. For Rand was, indeed, packing a snake. A talking one.

Objectivism. Who needs it? There is another gift. A gift beyond human reach. Ask, and it will be given to you. Seek, and you will find a hidden treasure, a pearl of great price. Why settle for the baubles of Ayn Rand’s orifice?