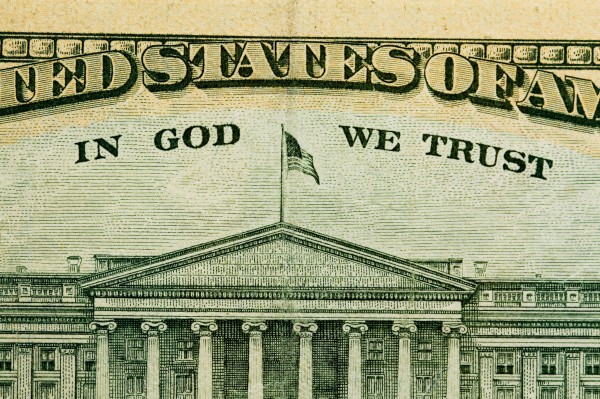 Minarchism (also known as minimal statism) is a political philosophy. It is variously defined by sources. In the strictest sense, it holds that states ought to exist (as opposed to anarchy), that their only legitimate function is the protection of individuals from aggression, theft, breach of contract, and fraud, and that the only legitimate governmental institutions are the military, police, and courts.

Sadly, in today’s Western world we are very far from a minarchist libertopia. The natural progress of things is for liberty to yield and government to gain ground. Our government departments ever increase in both size and number. Our surfeit of statism won’t be gone any time soon, let alone gone by lunchtime. 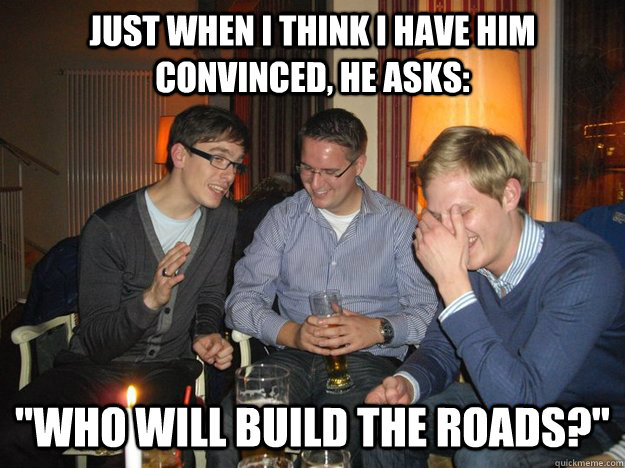 How can we justify paring back the state to the barest minarchist minimum?

There are plenty of problems with libertarianism. Underlying philosophical problems. I called attention to a couple of them here, here and here. And I’m about to present another problem. It’s a compelling argument for anarchism and against minarchism. (I’m not going to go into all the reasons why I think anarchism, rather than minarchism, looks set to win the day. For that, I suggest readers follow the arguments of anarchist thinkers such as Stephan Kinsella. See, e.g., his paper What It Means To Be an Anarcho-Capitalist.)

Here’s the problem. Libertarians think that taxation is theft, and that all giving, including the giving of money to the government, should be voluntary. Libertarians (of the minarchist/Randian variety) think that the (only) legitimate functions of government are providing defence and police forces and a judiciary, and that these functions should be funded voluntarily by the citizenry. But what if the citizenry don’t want to fund a minarchist state voluntarily? What then?

Here’s an excerpt from L.P.D.: Libertarian Police Department to illustrate the problem.

“Now, which one of you punks is going to pay me to investigate this crime?” No one spoke up.

“Come on,” I said. “Don’t you all understand that the protection of private property is the foundation of all personal liberty?”

“Seriously, guys. Without a strong economic motivator, I’m just going to stand here and not solve this case. Cash is fine, but I prefer being paid in gold bullion or autographed Penn Jillette posters.”

Nothing. These people were stonewalling me. It almost seemed like they didn’t care …

Elsewhere I presented the case for compulsory taxation. In the comments section to that post, a battle erupted between Damian Grant, a libertarian in the loose “More Freedom, Less Government” sense, and Mark Hubbard, a devout minarchist. Damian didn’t manage to better my case for compulsory taxation, but Mark didn’t score any points either. The whole thing was left hanging.

When Christian libertarians confront statists, statists just love to throw the Good Book at them! There are two Bible passages commonly mentioned.

I’ve lost count of the number of times I’ve been confronted with Jesus’s injunction to render unto Caesar. But this objection is easily demolished. To render is to give back. Jesus tells us to give back to Caesar what is Caesar’s and give back to God what is God’s. But what do we have that is Caesar’s? What have the Romans ever done for us?

Elsewhere, of course, the Bible tells us that all things belong to God. So the objection is easily dealt with.

Seemingly more difficult to deal with is the second objection, viz., Romans 13.

Let everyone be subject to the governing authorities, for there is no authority except that which God has established. The authorities that exist have been established by God. Consequently, whoever rebels against the authority is rebelling against what God has instituted, and those who do so will bring judgment on themselves. For rulers hold no terror for those who do right, but for those who do wrong. Do you want to be free from fear of the one in authority? Then do what is right and you will be commended. For the one in authority is God’s servant for your good. But if you do wrong, be afraid, for rulers do not bear the sword for no reason. They are God’s servants, agents of wrath to bring punishment on the wrongdoer. Therefore, it is necessary to submit to the authorities, not only because of possible punishment but also as a matter of conscience.

This is also why you pay taxes, for the authorities are God’s servants, who give their full time to governing. Give to everyone what you owe them: If you owe taxes, pay taxes; if revenue, then revenue; if respect, then respect; if honor, then honor. (NIV)

This objection is taken so seriously by Christian libertarians that the Facebook group of the same name deals with this passage (and only this passage) specifically in its “About” section.

But, far from dooming minarchist libertarianism, Romans 13 is its salvation! For, without this crucial passage, there is nothing in the Bible or anywhere else to stop the slide into anarchism.

I’ve been looking for a Biblical justification of libertarianism ever since I heard this speech. Now I think I’ve found it. In the last place I ever thought to look.

Romans 13 is libertarianism’s last bastion against the unrule of the godless.

This is the title track from Nile’s fourth album, Annihilation of the Wicked. The lyrics are based on the Amduat, an Ancient Egyptian funerary text which dates to around the middle of the second millennium BC. The English translation by Yakov Rabinovich is titled The Book of What’s in Hell.

What’s in hell, according to the Ancient Egyptians?

Seker
Ancient and Dead
Primeval Master of the World Below