What is art? I spent the best part of a decade studying philosophy, so I had plenty of opportunity to find out, but I avoided the philosophy of art (aesthetics) religiously. “I don’t know anything about art, but I know what I like,” was, and pretty much still is, my answer to the question.

Music is art. I don’t know much about music, but I know what I like. Heavy metal is my favourite musical genre, and Slayer is the greatest heavy metal band of all time. It really is that simple.

But not if you’re an Objectivist. Lindsay Perigo is an Objectivist, and he thinks that Slayer is indescribable filth. Why does he think this? Is it because he is in thrall to Ayn Rand’s batty aesthetics as given in The Romantic Manifesto?

Art is a selective re-creation of reality according to an artist’s metaphysical value-judgments.

Art … concretizes man’s fundamental view of himself and of existence.

The emotion involved in art is not an emotion in the ordinary meaning of the term. It is experienced more as a “sense” or a “feel,” but it has two characteristics pertaining to emotions: it is automatically immediate and it has an intense, profoundly personal (yet undefined) value-meaning to the individual experiencing it. The value involved is life, and the words naming the emotion are: “This is what life means to me.”

What utter bullshit. I don’t know much about art, but I know that Rand is wrong and that Tom Araya, Slayer’s vocalist and bass player, is right. Art represents. Art reflects. Araya says that Slayer’s music is “dark reflections” of society. Here’s some snippets of an interview with Tom Araya.

And here’s the same interview, lovingly transcribed by me. First up, wicked guitarist Kerry King.

Kerry King: I like to take potshots at religion because I think it’s the …. the biggest brainwashing thing that is totally acceptable in America and probably most every place else in the world. Um, I just … I think it’s a load of shit.

Thanks for that, Kerry, you atheist douche-bag. Moving right along …

Interviewer: Tom, another well-tread path with you is your Christian background …

Interviewer: … and the juxtaposition with your music.

Interviewer: What place do your personal beliefs have in Slayer?

Tom Araya: I guess that what we do is art. Right? And it’s, it’s … art can be a reflection of society. And I mean … and … we’re picking up the dark reflections [laughs] … and, you know, that’s what we’re reflecting. But, evil’s everywhere, man, everybody’s got it. It sits really deep in everybody. Some people can’t control it as much as others, I think it’s … it’s … it’s there. Regardless of whatever fucking religion you believe in and whatever it is you feel is right, everybody knows what’s wrong. Everybody knows that there’s … there’s wrong things, there are just things you DO NOT DO. And the people that don’t understand that or don’t believe that, then they’re really … they’re not really connected with themselves, spiritually. It doesn’t matter what the fuck you believe.

Interviewer: But God Hates Us All, I can’t help but come back, I mean … how does it fit in?

Tom Araya: How does it fit in?

Tom Araya: He doesn’t… he doesn’t … God doesn’t hate. It’s a great fucking title. When we wanted to make that an album title, I was, like, goddamn, it’s fucking really good. I think it will fucking piss a lot of people off.

Metalhead: The bands that want to be the biggest badasses pick the most badass subjects. It’s not that these people believe in this stuff. It’s just … you know, it’s … it’s a cool imagery that goes along with the music and, you know … some people believe in it, you know, I’m not going to deny that the … that the Norwegian bands are real, I mean, they’ve proven they’re real by their actions.

(One day I’ll post about “the Norwegian bands.” Black metal. EVIL stuff. Google ‘Varg Vikernes’, if you must.)

Below are two pictures, one of Tom Araya who writes songs about serial killers, and one of Heath Ledger who played the part of psychopathic uber-villain The Joker in the Batman movie The Dark Knight. 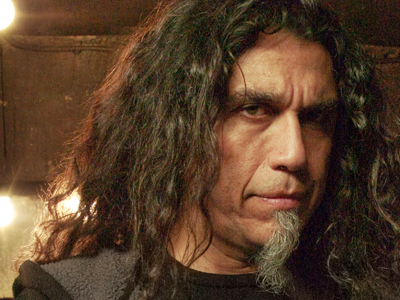 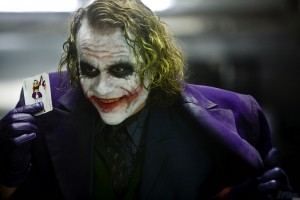 Heath Ledger got an RIP from Perigo, and his death was cause for a rewatching of Brokeback Mountain. Yet Slayer deserve to be branded “indescribable filth”? What’s the difference?

On Friday, 23 January 2009, in Dendermonde, Belgium, a 20 year old named Kim De Gelder, dressed as the Joker, conned his way into a day care centre and attacked babies and infants with a knife, stabbing them repeatedly in their heads and neck, killing 2 babies and a daycare provider and leaving numerous infants injured. (Wikipedia)

On Friday, 20 July 2012, a mass shooting occurred inside of a Century movie theater in Aurora, Colorado, during a midnight screening of the film The Dark Knight Rises. A gunman, dressed in tactical clothing, set off tear gas grenades and shot into the audience with multiple firearms, killing 12 people and injuring 58 others. The sole suspect is James Eagan Holmes, who was arrested outside the cinema minutes later. … According to two federal officials, he had dyed his hair red and called himself “the Joker” … Seventy-one people were shot or otherwise wounded, reported by mainstream news as the most victims of any mass shooting in United States history. (Wikipedia)

“He’s a psychopathic, mass murdering, schizophrenic clown with zero empathy.” — Heath Ledger on his portrayal of the Joker in the Dark Knight film. (source)

“Well,” Nicholson told reporters in London early Wednesday, “I warned him.” — Jack Nicholson, who had played the Joker in an earlier Batman movie series, commenting on the dangers of playing the Joker after Heath Ledger’s death. (source)