Kiwis and Aussies are the world’s biggest stoners. But we already knew that. “Experts are not surprised by new research showing New Zealand and Australia share the highest rates of cannabis and methamphetamine use in the world,” says the NZ Herald.

Here’s something I didn’t know. I clicked on the Herald’s handy related links and discovered that intelligent children are more likely than their less intelligent peers to use illegal drugs in later life, according to a study which has found a link between high IQ scores and drug use. Well, who’d’ve thought? I must be a genius!

Will de Cleene has an informative post showing where (else) in the world to find the stoners, the coke heads, the smack heads, the ravers, the speed freaks, the smokers and the drunks. Check it out.

After serving the standard sound-bites from the executive director of the New Zealand Drug Foundation, Ross Bell, the Herald reports some remarks from former police officer and managing director of “methamphetamine eduction company” MethCon, Dale Kirk.

“We’ve treated cannabis as a soft drug and we’ve ignored the risk of methamphetamine use, and unfortunately we’re playing catch-up.

“We’re now seeing initiatives from the Government aimed at the supply end, which are having some effect, I believe, yet it’s a little bit too late.”

Mr Kirk said the right way to tackle the drug problem was a mixed approach, including punitive measures like harsher sentences, more education, and more resources to treat addicts.

Harsher sentences? What can Kirk possibly be proposing? The maximum sentence for the sale, manufacture or importation of methamphetamine is already life imprisonment. How do you get harsher than that? The death penalty?

Methamphetamine had a devastating effect on families and communities, he said.

“I’m speaking to people all the time in the community who have family members who are affected by methamphetamine, and it is a consistent theme that you hear – it’s a downward spiral in their life, everything else takes secondary interest to the drugs.

“They lose families, they lose jobs, they lose money – and obviously ultimately they can lose their lives.”

Ultimately, yes, if we ever allow drug fascists like Kirk to have their way. Unfortunately, Kirk’s predecessor, Mike Sabin, is now in government as the MP for Northland. 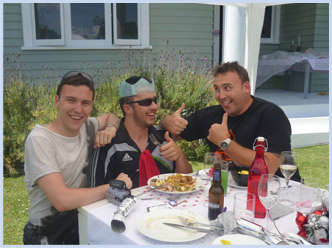 In the picture above, sourced from Sabin’s own website, Sabin gives the thumbs up to alcohol, a drug responsible for more social ills than P and all illegal drugs combined.

Sabin is an enemy of freedom and sane drug policy. Watch this space.