Letter from Birmingham Jail was penned by Martin Luther King, Jr. in April 1963. It was a response to an open letter by fellow clergymen critical of King’s participation in civil rights demonstrations.

Never before have I written so long a letter. I’m afraid it is much too long to take your precious time. I can assure you that it would have been much shorter if I had been writing from a comfortable desk, but what else can one do when he is alone in a narrow jail cell, other than write long letters, think long thoughts and pray long prayers?

The letter is long, but here are some excerpts. Click here to read the letter in its entirety.

I am in Birmingham because injustice is here.
I [am] compelled to carry the gospel of freedom beyond my own home town.
I cannot sit idly by in Atlanta and not be concerned about what happens in Birmingham.
Injustice anywhere is a threat to justice everywhere. We are caught in an inescapable network of mutuality, tied in a single garment of destiny. Whatever affects one directly, affects all indirectly.

In any nonviolent campaign there are four basic steps: collection of the facts to determine whether injustices exist; negotiation; self purification; and direct action. We have gone through all these steps in Birmingham.
We began a series of workshops on nonviolence, and we repeatedly asked ourselves: “Are you able to accept blows without retaliating?” “Are you able to endure the ordeal of jail?”

My friends, I must say to you that we have not made a single gain in civil rights without determined legal and nonviolent pressure. Lamentably, it is an historical fact that privileged groups seldom give up their privileges voluntarily.
We know through painful experience that freedom is never voluntarily given by the oppressor; it must be demanded by the oppressed.

One may well ask: “How can you advocate breaking some laws and obeying others?” The answer lies in the fact that there are two types of laws: just and unjust. I would be the first to advocate obeying just laws. One has not only a legal but a moral responsibility to obey just laws. Conversely, one has a moral responsibility to disobey unjust laws. I would agree with St. Augustine that “an unjust law is no law at all.”
Now, what is the difference between the two? How does one determine whether a law is just or unjust? A just law is a man made code that squares with the moral law or the law of God. An unjust law is a code that is out of harmony with the moral law. To put it in the terms of St. Thomas Aquinas: An unjust law is a human law that is not rooted in eternal law and natural law.

One who breaks an unjust law must do so openly, lovingly, and with a willingness to accept the penalty. I submit that an individual who breaks a law that conscience tells him is unjust, and who willingly accepts the penalty of imprisonment in order to arouse the conscience of the community over its injustice, is in reality expressing the highest respect for law.

In your statement you assert that our actions, even though peaceful, must be condemned because they precipitate violence. But is this a logical assertion? Isn’t this like condemning a robbed man because his possession of money precipitated the evil act of robbery? Isn’t this like condemning Socrates because his unswerving commitment to truth and his philosophical inquiries precipitated the act by the misguided populace in which they made him drink hemlock? Isn’t this like condemning Jesus because his unique God-consciousness and never-ceasing devotion to God’s will precipitated the evil act of crucifixion? We must come to see that, as the federal courts have consistently affirmed, it is wrong to urge an individual to cease his efforts to gain his basic constitutional rights because the quest may precipitate violence. Society must protect the robbed and punish the robber.

[T]ime itself is neutral; it can be used either destructively or constructively. More and more I feel that the people of ill will have used time much more effectively than have the people of good will. We will have to repent in this generation not merely for the hateful words and actions of the bad people but for the appalling silence of the good people. Human progress never rolls in on wheels of inevitability; it comes through the tireless efforts of men willing to be co workers with God, and without this hard work, time itself becomes an ally of the forces of social stagnation. We must use time creatively, in the knowledge that the time is always ripe to do right.

Oppressed people cannot remain oppressed forever. The yearning for freedom eventually manifests itself, and that is what has happened to the American Negro. Something within has reminded him of his birthright of freedom, and something without has reminded him that it can be gained.

I was initially disappointed at being categorized as an extremist, as I continued to think about the matter I gradually gained a measure of satisfaction from the label. Was not Jesus an extremist for love: “Love your enemies, bless them that curse you, do good to them that hate you, and pray for them which despitefully use you, and persecute you.” Was not Amos an extremist for justice: “Let justice roll down like waters and righteousness like an ever flowing stream.” Was not Paul an extremist for the Christian gospel: “I bear in my body the marks of the Lord Jesus.” Was not Martin Luther an extremist: “Here I stand; I cannot do otherwise, so help me God.” And John Bunyan: “I will stay in jail to the end of my days before I make a butchery of my conscience.” And Abraham Lincoln: “This nation cannot survive half slave and half free.” And Thomas Jefferson: “We hold these truths to be self evident, that all men are created equal . . .” So the question is not whether we will be extremists, but what kind of extremists we will be. Will we be extremists for hate or for love?

I have no despair about the future. I have no fear about the outcome of our struggle in Birmingham, even if our motives are at present misunderstood. We will reach the goal of freedom in Birmingham and all over the nation, because the goal of America is freedom. Abused and scorned though we may be, our destiny is tied up with America’s destiny. Before the pilgrims landed at Plymouth, we were here. Before the pen of Jefferson etched the majestic words of the Declaration of Independence across the pages of history, we were here. For more than two centuries our forebears labored in this country without wages; they made cotton king; they built the homes of their masters while suffering gross injustice and shameful humiliation—and yet out of a bottomless vitality they continued to thrive and develop. If the inexpressible cruelties of slavery could not stop us, the opposition we now face will surely fail. We will win our freedom because the sacred heritage of our nation and the eternal will of God are embodied in our echoing demands. 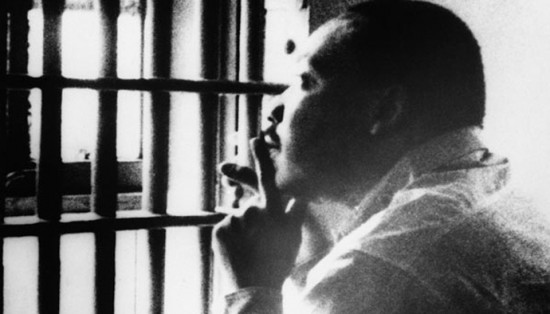 3 thoughts on “The Negro Is Your Brother”