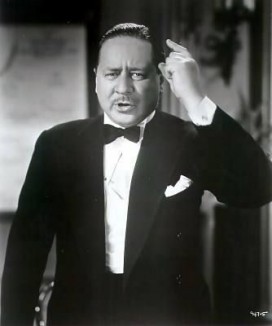 Also known as Benchley’s Law of Distinction, this quote is due to Robert Benchley, US actor, author, and humourist (1889 – 1945). Benchley was a dualist.

In philosophy of mind, dualism is [a view] about the relationship between mind and matter, which claims that mind and matter are two ontologically separate categories. In particular, mind-body dualism claims that neither the mind nor matter can be reduced to each other in any way, and thus is opposed to materialism in general, and reductive materialism in particular. Mind-body dualism can exist as substance dualism which claims that the mind and the body are composed of a distinct substance, and as property dualism which claims that there may not be a distinction in substance, but that mental and physical properties are still categorically distinct, and not reducible to each other. This type of dualism is sometimes referred to as “mind and body” and stands in contrast to philosophical monism, which views mind and matter as being ultimately the same kind of thing. …

Descartes, after whom Cartesian dualism is named, is famous for the phrase, ‘I think, therefore I am.’ There’s another phrase he used in Meditations on First Philosophy. It is ‘clear and distinct idea.’

Furthermore, my mind is me, for the following reason. I know that I exist and that nothing else belongs to my nature or essence except that I am a thinking thing; from this it follows that my essence consists solely in my being a thinking thing, even though there may be a body that is very closely joined to me. I have a clear and distinct idea of myself as something that thinks and isn’t extended, and one of body as something that is extended and does not think. So it is certain that I am really distinct from my body and can exist without it.

‘Clear and distinct’ is on a par with ‘self-evident’. An idea that’s clear and distinct to one person may be unclear and indistinct to another. And I don’t think much of Cartesian dualism. But I mention this phrase because it summarises two things (there are others) I think every philosopher should aspire to.

(1) Being clear.
(2) Distinguishing between distinct things.