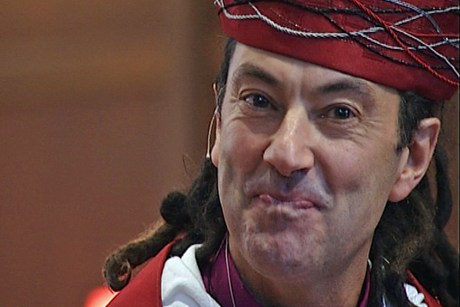 This afternoon, my mum and I attended the Episcopal Ordination (Consecration) of Bishop-Elect Reverend Justin Duckworth (previously blogged about here) and his Installation (Enthronement) as the 11th Bishop of Wellington at St Paul’s Cathedral in Wellington.

It was a spectacular occasion. More funny hats than you can shake a stick at. The stick, on this occasion, being the impressive Pastoral Staff, shaped and carved (out of matai) by Huitau te Hau. Justin recounted that he had received the Pastoral Staff the previous morning, at Rimutaka Prison. It was gifted with a message, viz., “Remember who you serve,” or words to that effect.

It was a joyous occasion, but also a serious one. The seriousness of the occasion was evidenced by one of the three readings, viz., John 21:15-19.

The part of the service that impressed me most occurred shortly after the ordination and installation of the new bishop. Justin was greeted, welcomed, and his wife Jenny was presented with flowers, and then (from the event programme)

Bishop Justin responds and then symbolically washes the feet of three members of the Diocese.

That’s right. His first significant act as Bishop was to kneel before those whom he has been appointed to serve, and wash their feet. This is true humility. Being a libertarian, I could not help but be reminded of Matthew 20:25-28 (also Mark 10:42-45).

Jesus called them together and said, “You know that the rulers of the Gentiles lord it over them, and their high officials exercise authority over them. Not so with you. Instead, whoever wants to become great among you must be your servant, and whoever wants to be first must be your slave—just as the Son of Man did not come to be served, but to serve, and to give his life as a ransom for many.”

If I had my way, every session of Parliament would begin in a like manner, with every Member of Parliament washing the feet of one of their electorate constituents. Just to remind the bastards who they’re there to serve.