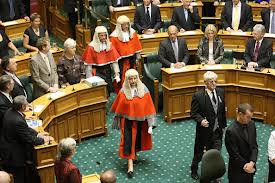 In this situation is it right for me (or some other person) to use force against a neighbour?

An attempt to explain this discrepancy was made to me in a recent discussion. The explanation given was that the government (in this case the court system) is like a father settling disputes amongst its children.

I think viewing government as a father is idolatry.

Questions for the readers…
Do you believe there are situations where it would be wrong for an individual to use force but right for government?
If so, how do you explain the discrepancy?

One thought on “Our Father Who Art in Parliament”