In the history of courageous activism against Tyranny and Evil, the story of the White Rose Resistance to Nazism is truly Awesome!
Brave Young Souls whom were Murdered by The Nazi state for their Defiance of Hitler’s Infernal Rule.

For an excellent Personal account of the Lives of Hans and Sophie Scholl, and their Enlightened and Freedom loving Parents… Read Anton Gill’s account Here:

The following are Excerpts From Wikipedia…

Origin:…In 1941 Hans Scholl read a copy of a sermon by an outspoken critic of the Nazi regime, Bishop August von Galen, decrying the euthanasia policies (extended that same year to the concentration camps)[2] which the Nazis maintained would protect the German gene pool.[3] Horrified by the Nazi policies, Sophie obtained permission to reprint the sermon and distribute it at the University of Munich as the group’s first leaflet prior to their formal organization… 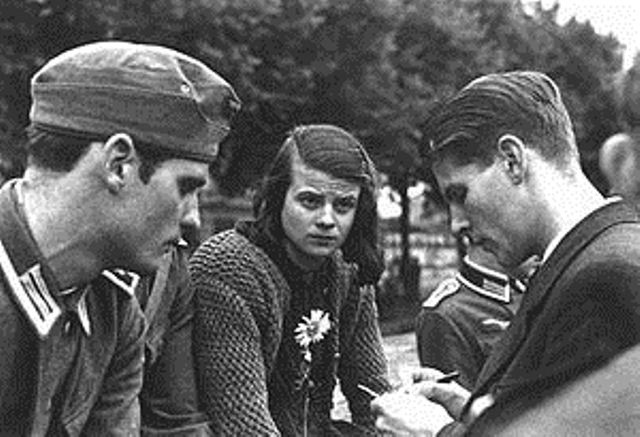 “ Isn’t it true that every honest German is ashamed of his government these days? Who among us has any conception of the dimensions of shame that will befall us and our children when one day the veil has fallen from our eyes and the most horrible of crimes—crimes that infinitely outdistance every human measure—reach the light of day? ”
— From the first leaflet of the White Rose

“ Since the conquest of Poland three hundred thousand Jews have been murdered in this country in the most bestial way … The German people slumber on in their dull, stupid sleep and encourage these fascist criminals … Each man wants to be exonerated of a guilt of this kind, each one continues on his way with the most placid, the calmest conscience. But he cannot be exonerated; he is guilty, guilty, guilty! ”
— From the second leaflet of the White Rose

On 18 February 1943, coincidentally the same day that Nazi propaganda minister Joseph Goebbels called on the German people to embrace total war in his Sportpalast speech, the Scholls brought a suitcase full of leaflets to the university. They hurriedly dropped stacks of copies in the empty corridors for students to find when they flooded out of lecture rooms. Leaving before the class break, the Scholls noticed that some copies remained in the suitcase and decided it would be a pity not to distribute them. They returned to the atrium and climbed the staircase to the top floor, and Sophie flung the last remaining leaflets into the air. This spontaneous action was observed by the custodian Jakob Schmid. The police were called and Hans and Sophie Scholl were taken into Gestapo custody. Sophie and Hans were interrogated by Gestapo interrogator Robert Mohr, who initially thought Sophie was innocent. However, after Hans confessed, Sophie assumed full responsibility in an attempt to protect other members of the White Rose. Despite this, the other active members were soon arrested, and the group and everyone associated with them were brought in for interrogation.

The Scholls and Probst were the first to stand trial before the Volksgerichtshof—the People’s Court that tried political offenses against the Nazi German state—on 22 February 1943. They were found guilty of treason and Roland Freisler, head judge of the court, sentenced them to death. The three were executed the same day by guillotine at Stadelheim Prison. All three were noted for the courage with which they faced their deaths, particularly Sophie, who remained firm despite intense interrogation (however, reports that she arrived at the trial with a broken leg from torture are false). She said to Freisler during the trial, “You know as well as we do that the war is lost. Why are you so cowardly that you won’t admit it?”

When Hans was executed, he said “Let freedom live” as the blade fell.