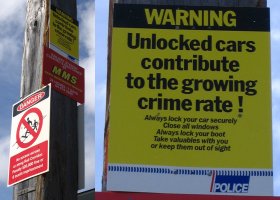 “Unlocked cars contribute to the growing crime rate!” reads this warning sign by the train station car park. There’s something not quite right about this sign. And it’s not so much what the police say, as the way they say it.

Unlocked cars don’t commit crimes. Criminals do. And criminals are responsible for 100% of thefts of and from unlocked cars, not the unfortunate car owners. Yet the sign leaves me feeling that if I leave my car unlocked and it gets pillaged then I am the criminal.

It’s a classic case of finding someone else – anyone else – to blame instead of the actual offender. No wonder, then, that the government has now decided to penalise those who take insufficient measures to protect their cars from theft.

Last week Justice Minister Phil Goff launched the government’s Vehicle Crime Reduction Programme. All imported cars less than 15 years old (and therefore worth stealing) will now be required to be fitted with immobilisers and be marked with several thousand uniquely identifying microdots. At the car owner’s expense, of course.

Jim Peron says that Goff is substituting Nanny for the police officer. “Instead of protecting people from criminals he proposes a policy to force people to change how they live so the government’s failure to protect them isn’t as apparent.”

Goff is confident that his compulsory measures will lead to a significant reduction in vehicle thefts. But the problem is that criminals will find other, easier targets. The homes of the people who leave their locked, immobilised cars in the station car park, for example. If you want to give the message that crime doesn’t pay, you have to catch the criminals, not chide and coerce their victims into paying for ever more sophisticated security measures.

Take it easy, and take the train. And don’t forget to lock your car.