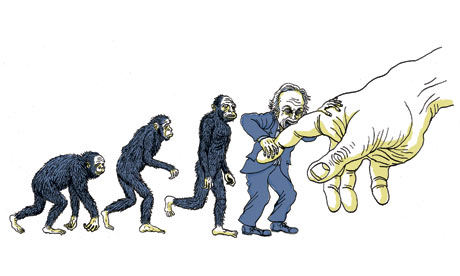 The latest addition to my reading list is The Greatest Show on Earth (2009) by Richard Dawkins. (You can read it here.)

In his earlier book, The Ancestor’s Tale (2004), Dawkins traced human ancestry back to the dawn of life. Cool story, bro, but where’s the evidence? To answer the question, Dawkins wrote The Greatest Show on Earth. The book is subtitled The Evidence for Evolution and that’s why I’m reading it.

So far I’ve read only the first paragraph of the Preface, and it’s not off to a good start.

THE evidence for evolution grows by the day, and has never been stronger. At the same time, paradoxically, ill-informed opposition is also stronger than I can remember. This book is my personal summary of the evidence that the ‘theory’ of evolution is actually a fact – as incontrovertible a fact as any in science.

I’ll report back on the rest of the book when I’ve read it.

Meanwhile, philosopher Thomas Nagel has a new book out. It’s called Mind and Cosmos: Why the Materialist Neo-Darwinian Conception of Nature is Almost Certainly False. Worth a look inside! Here’s Amazon’s book description.

The modern materialist approach to life has conspicuously failed to explain such central mind-related features of our world as consciousness, intentionality, meaning, and value. This failure to account for something so integral to nature as mind, argues philosopher Thomas Nagel, is a major problem, threatening to unravel the entire naturalistic world picture, extending to biology, evolutionary theory, and cosmology.

Since minds are features of biological systems that have developed through evolution, the standard materialist version of evolutionary biology is fundamentally incomplete. And the cosmological history that led to the origin of life and the coming into existence of the conditions for evolution cannot be a merely materialist history, either. An adequate conception of nature would have to explain the appearance in the universe of materially irreducible conscious minds, as such.

Nagel’s skepticism is not based on religious belief or on a belief in any definite alternative. In Mind and Cosmos, he does suggest that if the materialist account is wrong, then principles of a different kind may also be at work in the history of nature, principles of the growth of order that are in their logical form teleological rather than mechanistic.

In spite of the great achievements of the physical sciences, reductive materialism is a world view ripe for displacement. Nagel shows that to recognize its limits is the first step in looking for alternatives, or at least in being open to their possibility.

Not bad for an atheist, huh?