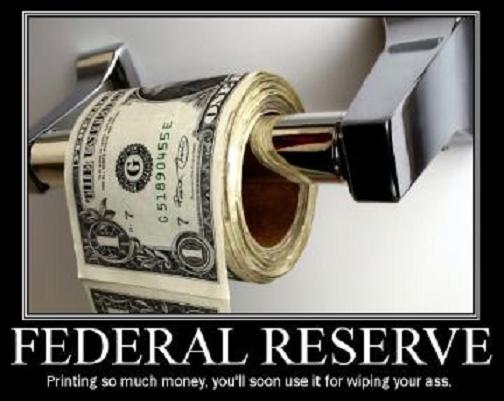 ^^^^^^You think this is a joke?
Sorry, it’s economic reality!
Just ask your Neighbors whom escaped Zimbabwe about governments printing money and hyper inflation.
It is cheaper to wipe your arse on ten dollar notes than squares of dunny paper!
In places like Germany and Russia Money was blowing around the streets like worthless trash. 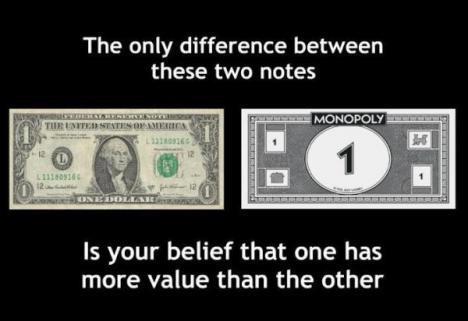 Today ‘Money’ exists to a large degree in cyberspace… as numbers in an electronic system, so it is not necessary for Socialists to Print as much paper as in times pass to achieve the same results…>>>inflation/ devaluation<<<... and so when the shit deepens, Yanks may not be seen using wheelbarrows to carry their lunch money yet their credits in the bank will be just as worthless. Look up the meaning of the phrases Hyperinflation. Look up the history of the saying "Don’t give a Continental"... Its all about Fiat Currency… Governments whom Mass print money/credits without having the means to exchange it for mediums of intrinsic value like Gold, silver, etc.
Governments have historically resorted to Fiat Money when they are in dire straits…Broke and in debt.
It results in poverty and ruin for the populations of such Nations.
Real Money is a ‘promise to Pay the face value in Gold or silver upon Demand’ by the issuers, which can only be done when the amount in circulation is less than or equal to the stores of real wealth in the vaults. When the money supply exceeds what is in the vault, it is impossible to redeem your paper currency/credits and you are stuck with BUM PAPER!

Yet what do we find is happening In America under Obarma?
Herd of QE1, QE2, QE3? (Quantitative Easing)
Look it Up!
Do you understand that they implemented QE2 because QE1 Flopped?
They have implemented QE3 because QE2 Flopped too!
Google *QE2 Fail* and see for yourself. 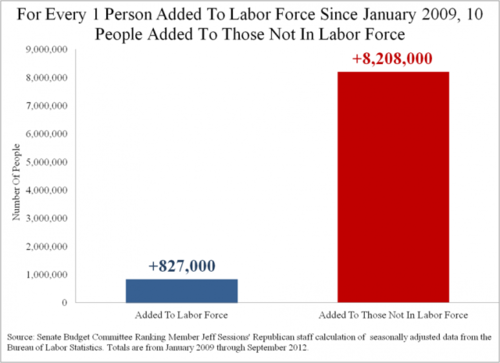 Ron Paul forced the Federal Reserve to admit it has *No Gold*!!!
When will Socialist realise that you cant print your way out of trouble, not print your way into prosperity?
The Bastards know that Printing money devalues it! Even the Tree hugging Zombies in New Zealand know that!
Here in New Zealand The Socialist Green Party suggested our government gets more Paper Money Printed with the express idea of reducing the value of the NZ Dollar with the insane notion that this will help our export sector and economy.
It’s economic voodoo!
They share the common belief with Obama’s democrats that Governments create wealth, and have the right to Meddle / control the economies of their citizens!
It’s Corrupt! It’s Theft! It’s Funny money!
It’s the final stage of Economic ruin.
All this meddling and regulation is Socialism not capitalism, it’s fascism, yet the Propaganda merchants of the Left have managed to brainwash the masses into thinking the corporate welfare… the bailouts is Capitalism!!!
Lies upon lies!
Stupidity upon stupidity!
Bail outs and Regulations are`ANTICAPITALISM!
Capitalism allows Failing Companies to Fail!
Capitialism does not Steel money from the People to prop up Bad businesses!
The freemarket allows business to Profit or go belly up baces upon their own merits.
What the regulations, Bailouts, welfareism, and other over-government (ie Socialism) has done is create a massive systemic failure and bankrupted the governments of the world.
There’s a massive crash coming folks!
Herd of the Fiscal cliff?
Understand why Obama wants to confiscate Guns…. to keep the people under when the shit hits the fan!
He know when it does the People will come gunning for his hide.
The People of America had there chance to save themselves.
They should have Backed Ron Paul, yet the vested interests wanted to maintain the Status quo at all costs.
They Made sure ‘Mit Romney’, not ‘Ron Paul’ appeared next to Obama on the ballot.

The Elite Fascists know what’s coming.
They put Obama in power to stall for time… so that they could prepare for the Great crash.
As we speak they are building Bunkers and stacking away Gold for the storm to come.
They will be sitting Pretty when there is chaos and starvation on the streets.
They will support the tyranny which will rise up to suppress the rioting masses.
The end is Nigh.
Prepare yourselves My friends… and pray.