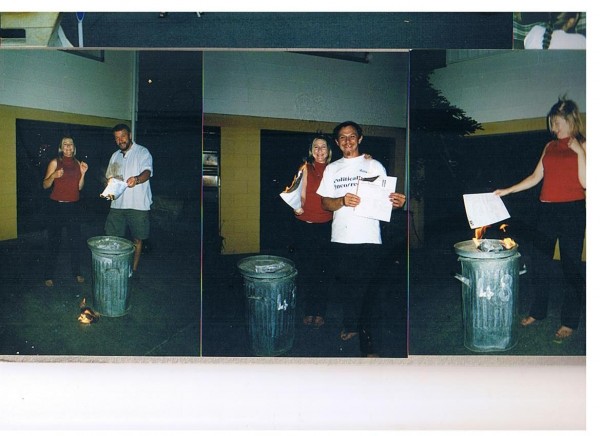 A friend Andrew, My Wife Joy and I burning our Census forms 2001.

My Wife has told me the Census Nazis have dropped off our papers for 2013.
They demand that we fill them out.
It’s compulsory.
Yet don’t I have the right to privacy?
What business is it of theirs what religion I am?
What ethnicities are in my family tree?, or where I happen to be on census night?

Now my life is an open book.
You can find out all these things simply by looking at my face book page.
Yet I intend to refuse to fill this form out…. For the sake of the principles that I have the right to privacy and the State has no legitimate rights to demand such information from me!
They work for Me!
I am not their subject!
The census is a violation of my rights.
After I have made a point for resisting their tyranny…for several visits, I will probably simply sign my name and address and they will go away.
I have done this for the past two census.
I burned my papers once!
The look on the Little Nazi’s face when I handed her a bag of ashes was priceless!
She went away and called in her more threatening Superior.
Blar! blar! Unless you fill out this form you will be summoned to appear in court, and will be fined.
And should you still refuse you will appear again, and fined… until you comply!
Most people submit to this tyranny without so much as a peep!

Yet the reality is folks that the only information you must give is your Name and address.
That’s all they will ever get from me… after I have exposed them as the nasty little Nazi’s that they are!
So I hope some of you appreciate the gravity of this situation and join me in my resistance to Bully Government powers.

Some of you may be thinking that the Government uses this information for their Social Planning.
That’s Good enough reason for me Not to fill them out!
You see I totally despise their ‘Social planning!’
Ie they intend to use this information to assist their Political machinations!
Give me Liberty, or give me Death!
Tim Wikiriwhi
Christian Libertarian.

“Good afternoon, Kaya Oraaa & welcome to the Politically Incorrect Show on the free speech network, Radio Pacific, for Monday March 12, proudly sponsored by Neanderton Nicotine Ltd., the show that says bugger the politicians & bureaucrats & all the other bossyboot busybodies who try to run our lives with our money; that stands tall for free enterprise, achievement, profit, & excellence, against the state-worshippers in our midst; that stands above all for the most sacred thing in the universe, the liberty of the human individual.

A couple of Libertyloopers have reported taking great delight in handing census-collectors the charred remains of their census forms. One of them, Tim Wikiriwhi, organised a ceremonial burning in the Waikato region on census night. Here’s part of the speech he gave consigning the form to the flames:

“Why are we doing this? Is this a childish act of rebellion? An act of lawlessness? Many New Zealanders honestly believe that we are fools and even criminals for doing this, Are they right? No! …

“Two very important truths are in question here. First, what is the legitimate role of government, and where do the liberties of the individual rightly begin and end, defining what is truly legitimate
and what is truly a crime?

“To quote Thomas Jefferson and the American Declaration of Independence: ‘We hold these truths to be self evident – that all men are created equal, that they are endowed by their creator with certain unalienable rights: that among these are life, liberty and the pursuit of happiness; that to secure these rights governments are instituted among men, deriving their just powers from the consent of the governed; that whenever any form of government becomes destructive of these ends, it is the right of the people to alter or to abolish it, and to institute new government …

“Thus there exists a limit to government. A government that keeps within its boundaries is just. But a government that does not recognise its legitimate function and crosses into domains in which it has no business immediately becomes the violator of the rights it was instituted to protect.

“The government is not a law unto itself and has no right to violate you any more than a thief, rapist or murderer… Demanding that you fill out this form under threat, the state is committing a crime against you.

“Burning this document can never be constituted to be a crime because you are perpetrating no injustice upon anyone! And so your actions fall completely within the boundaries of legitimate liberties.

“Burning this document is the act of free men standing up and saying I’m not your property! My life is my own. So let us light us a fire tonight and raise our glasses for freedom!”

These portions of Tim’s speech will be posted on my web site later today, under Latest PI Show editorial: www.freeradical.co.nz

And right now I’d like to bestow upon him the Free Radical Award, for his guts & spirit. To Tim Wikiriwhi:

7 thoughts on “The Census. Are you really free?”