Elsewhere, my co-blogger Tim is arguing with commenter Terry about Objectivist ethics.

The key to their dispute is the following brief remark by commenter Matt (quoting Terry).

“It’s not rational to accept a value from another without giving a value in return” why not, on standard means ends accounts of rationality that’s perfectly rational, some argument for this conclusion is needed.

Matt refers to “standard means ends accounts of rationality”. David Hume, the greatest philosopher who ever lived, gives such a standard account in the following passage. 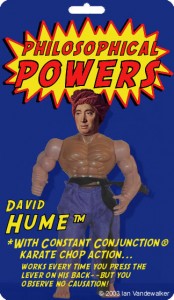 [P]assions can be contrary to reason only so far as they are accompany’d with some judgment or opinion. According to this principle, which is so obvious and natural, ’tis only in two senses, that any affection can be call’d unreasonable. First, when a passion, such as hope or fear, grief or joy, despair or security, is founded on the supposition or the existence of objects, which really do not exist. Secondly, When in exerting any passion in action, we chuse means insufficient for the design’d end, and deceive ourselves in our judgment of causes and effects. Where a passion is neither founded on false suppositions, nor chuses means insufficient for the end, the understanding can neither justify nor condemn it. ‘Tis not contrary to reason to prefer the destruction of the whole world to the scratching of my finger. ‘Tis not contrary to reason for me to choose my total ruin, to prevent the least uneasiness of an Indian or person wholly unknown to me. ‘Tis as little contrary to reason to prefer even my own acknowledge’d lesser good to my greater, and have a more ardent affection for the former than the latter.

“The Objectivist ethics holds that human good does not require human sacrifices and cannot be achieved by the sacrifice of anyone to anyone. It holds that the rational interests of men do not clash—that there is no conflict of interests among men who do not desire the unearned, who do not make sacrifices nor accept them, who deal with one another as traders, giving VALUE FOR VALUE. [ Ayn Rand, “The Objectivist Ethics,”The Virtue of Selfishness, 31] (emphasis mine)

“It is only with (other men’s) mind that I can deal and only for my own self-interest, when they see that my interest COINCIDES WITH THEIRS. WHEN THEY DON’T, I ENTER NO RELATIONSHIP” [Galt’s speech, Atlas Shrugged] (emphasis mine)

How much more explicitly could Miss Rand state the case?

The above supports without contradiction the fact that a rational man who identifies that it is not in his customer’s interests to deal with him (regardless of his customer’s protestations to the contrary), he will not deal with him. Why? Because it is not rational to accept a value from another man without giving a value in return.

Objectivist ethics is contrary to reason.

14 thoughts on “‘Tis not contrary to reason”