Conor Friedersdorf at The Atlantic reports.

The grand jury report in the case of Kermit Gosnell, 72, is among the most horrifying I’ve read. “This case is about a doctor who killed babies and endangered women. What we mean is that he regularly and illegally delivered live, viable babies in the third trimester of pregnancy – and then murdered these newborns by severing their spinal cords with scissors,” it states. “The medical practice by which he carried out this business was a filthy fraud in which he overdosed his patients with dangerous drugs, spread venereal disease among them with infected instruments, perforated their wombs and bowels – and, on at least two occasions, caused their deaths.”

Charged with seven counts of first-degree murder, Gosnell is now standing trial in a Philadelphia courtroom. An NBC affiliate’s coverage includes testimony as grisly as you’d expect. “An unlicensed medical school graduate delivered graphic testimony about the chaos at a Philadelphia clinic where he helped perform late-term abortions,” the channel reports. “Stephen Massof described how he snipped the spinal cords of babies, calling it, ‘literally a beheading. It is separating the brain from the body.’ He testified that at times, when women were given medicine to speed up their deliveries, ‘it would rain fetuses. Fetuses and blood all over the place.'”

One former employee described hearing a baby screaming after it was delivered during an abortion procedure. “I can’t describe it. It sounded like a little alien,” she testified. Said the Philadelphia Inquirer in its coverage, “Prosecutors have cited the dozens of jars of severed baby feet as an example of Gosnell’s idiosyncratic and illegal practice of providing abortions for cash to poor women pregnant longer than the 24-week cutoff for legal abortions in Pennsylvania.”

The grand jury report includes an image of a particularly extreme case (the caption is theirs, not mine): 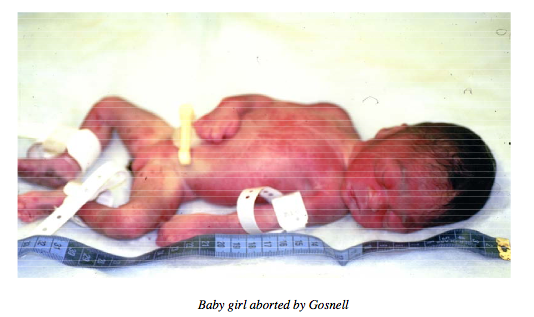 That photo pertains to an unusual case, in that the mother had to seek help at a hospital after the abortion she sought at Gosnell’s office went awry. The grand jury report summarizes a more typical late-term abortion, as conducted at the clinic, concluding with the following passage:

When you perform late-term “abortions” by inducing labor, you get babies. Live, breathing, squirming babies. By 24 weeks, most babies born prematurely will survive if they receive appropriate medical care. But that was not what the Women’s Medical Society was about. Gosnell had a simple solution for the unwanted babies he delivered: he killed them. He didn’t call it that. He called it “ensuring fetal demise.” The way he ensured fetal demise was by sticking scissors into the back of the baby’s neck and cutting the spinal cord. He called that “snipping.”

Over the years, there were hundreds of “snippings.” Sometimes, if Gosnell was unavailable, the “snipping” was done by one of his fake doctors, or even by one of the administrative staff.

But all the employees of the Women’s Medical Society knew. Everyone there acted as if it wasn’t murder at all. Most of these acts cannot be prosecuted, because Gosnell destroyed the files. Among the relatively few cases that could be specifically documented, one was Baby Boy A. His 17-year-old mother was almost 30 weeks pregnant — seven and a half months — when labor was induced. An employee estimated his birth weight as approaching six pounds. He was breathing and moving when Gosnell severed his spine and put the body in a plastic shoebox for disposal. The doctor joked that this baby was so big he could “walk me to the bus stop.” Another, Baby Boy B, whose body was found at the clinic frozen in a one-gallon spring-water bottle, was at least 28 weeks of gestational age when he was killed. Baby C was moving and breathing for 20 minutes before an assistant came in and cut the spinal cord, just the way she had seen Gosnell do it so many times. And these were not even the worst cases.

There’s plenty more to this story, but I expect by now you’ve heard and seen more than enough.

Bloggers are asking why this story has received only scant, sanitised coverage in the MSM.

To sum up, this story has numerous elements any one of which would normally make it a major story. And setting aside conventions, which are flawed, this ought to be a big story on the merits.

The news value is undeniable.

Why isn’t it being covered more?

I think the answer is

The mainstream media won’t cover this trial because it makes their pro-abortion views look bad. Plain and simple. They are advocates for their own pet causes. NOT objective journalists.

Relatively few people wish to commit mass murder on the scale of Gosnell – that’s the good news. The bad news is that the vast ranks of newspaper publishers, TV executives, editors, news producers, radio assignment editors, and reporters somehow reached an instant, near universal consensus that a man who may well be America’s all-time champion mass murderer isn’t a story at all, never mind one to hold the front page for – because they didn’t see him as a murderer; they saw him as a “choice-provider” who got a little out of hand.

If the media won’t cover this story, what else aren’t they covering?

There’s nothing original in today’s blog post, but … well, I think that you should know.

8 thoughts on “Butchered at birth”