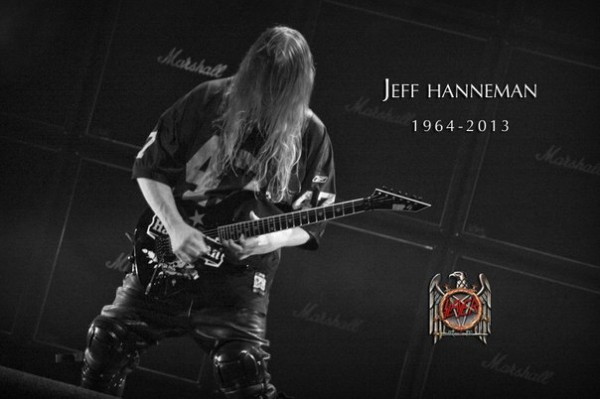 I took umbrage at this, and messaged the author. He explained

It was a sad life. I wish he would have turned to Christ, but it didn’t appear that he did.

Fair comment. I, too, am sad that Jeff did not repent before he took his final breath. But a sad, wasted life? And hell awaits? On a tribute thread?

Yes, folks, this is the post on which you get to speculate (in the comments) on Jeff Hanneman’s afterlife destination!

Here’s what I believe.

Hell, or “Hades” in the original Hebrew, is the grave. And that is where Jeff Hanneman will soon be. (After his funeral, but I’ll get to that.) In God’s eyes, we are all sinners, and the wages of sin is death, so (other things being equal) we’re all going to die. It’s a simple enough argument, and even atheists agree with its conclusion. But here is Christ’s promise to mortal man.

For God so loved the world that he gave his one and only Son, that whoever believes in him shall not perish but have eternal life.

Christians live in the hope that one day Jesus will return to fulfill His promise. Then shall be the Resurrection of the Dead and the Final Judgement. After which there is rest for the wicked, who succumb to the Second Death (Satan Laughs As You Eternally Rot) while the redeemed enjoy eternal life.

It’s a simple, stark choice. Do you go to the grave, or do you submit your life to Christ? Doing God’s will is all that’s asked of you. It sure beats pursuing your own pitiful plans!

But the reality is that that’s what Jeff Hanneman did. And he succeeded, by earthly standards. He drank lots of Heineken. Lots. And he screwed lots of hot metal chicks. Lots. As rock stars do. And then he settled down and married his lovely wife, Kathy. (So, this is all speculation, but I bet I’m not wrong.) And, in the meantime, he wrote the best songs for, and played lead guitar for, the greatest heavy metal band of all time. I am in awe. This is not a good Christian life by any reckoning, but a sad, wasted life? I don’t think so.

I am grateful to Jeff Hanneman for his life. He has brought me, and countless other metallers, hour upon hour of listening pleasure. And he’s saved people’s lives. Slayer’s music has given many disaffected, disturbed, depressed young people, on the verge of topping themselves, the strength to carry on. (Again, this is all mostly speculation, but I bet I’m not wrong.)

That’s my comment on my friend’s Facebook thread, and it leaves the comment at the top of this post for dead. Which brings me to my final point. The commenter’s Christian brothers and sisters will, I hope, at least understand where the commenter was coming from. But non-Christians (as I was, until recently) will not. I took exception to the comment because it was a steady diet of such dismissive, derogatory, judgemental comments from Christians that helped sustain my more than three decades of atheism in adult life.

We are Christ’s representatives on earth, and we should act like we know it. It’s one reason I founded this blog. To reach out to other Slayer fans!

Jeff Hanneman’s afterlife destination is ultimately up to his Maker. May God have mercy on his soul.

6 thoughts on “Satan Laughs As You Eternally Rot”