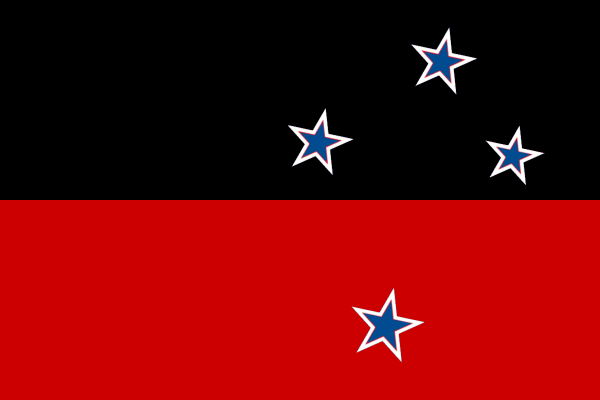 Should the design of the New Zealand flag be changed? That’s the question the people at the NZflag.com Trust would like to see on a referendum at the next election. It’s all a bit of a hullubaloo. The right time to change the flag is when we become the Republic of New Freeland. Bring to light that day of joy!

Meanwhile, here is my proposal for our new flag. The new flag has the virtues of elegance, simplicity and respect for our history and traditional values.

Black, red and white are the colours of Māori, discoverers and first inhabitants of New Zealand. The black represents Te Korekore, the realm of potential being, as well as signifying Rangi, the Heavens. The red represents Te Whai-Ao, the realm of coming into being, and signifies Papatuanuku, the Earth Mother. The white of the stars represents Te Ao-Marama, the realm of being and light.

The new flag retains the red, white and blue of the Union Jack, recalling our nation’s origins as a British colony. In the stars of the new flag, a thin border of red separates the inner blue from the outer white. The Southern Cross itself is retained in recognition of our nation’s strong Christian heritage.

The new flag shall be known as the New Zealand stars and stripes, paying homage to the Western heritage of democracy and freedom we share with our friends and allies.