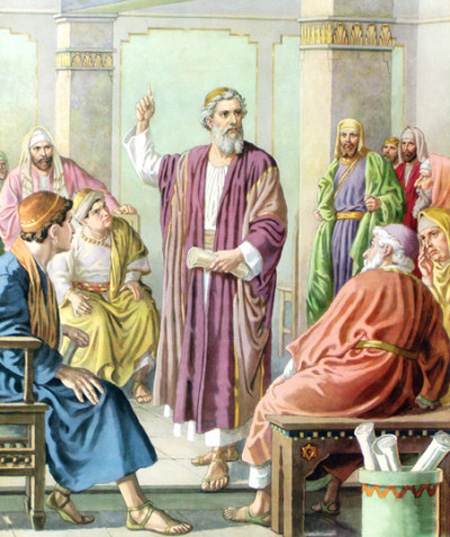 Having brought the apostles, they made them appear before the Sanhedrin to be questioned by the high priest. “We gave you strict orders not to teach in this name,” he said. “Yet you have filled Jerusalem with your teaching and are determined to make us guilty of this man’s blood.”

Peter and the other apostles replied: “We must obey God rather than men! The God of our fathers raised Jesus from the dead—whom you had killed by hanging him on a tree. God exalted him to his own right hand as Prince and Savior that he might give repentance and forgiveness of sins to Israel. We are witnesses of these things, and so is the Holy Spirit, whom God has given to those who obey him.”

When they heard this, they were furious and wanted to put them to death. But a Pharisee named Gamaliel, a teacher of the law, who was honored by all the people, stood up in the Sanhedrin and ordered that the men be put outside for a little while. Then he addressed them: “Men of Israel, consider carefully what you intend to do to these men. Some time ago Theudas appeared, claiming to be somebody, and about four hundred men rallied to him. He was killed, all his followers were dispersed, and it all came to nothing. After him, Judas the Galilean appeared in the days of the census and led a band of people in revolt. He too was killed, and all his followers were scattered. Therefore, in the present case I advise you: Leave these men alone! Let them go! For if their purpose or activity is of human origin, it will fail. But if it is from God, you will not be able to stop these men; you will only find yourselves fighting against God.”