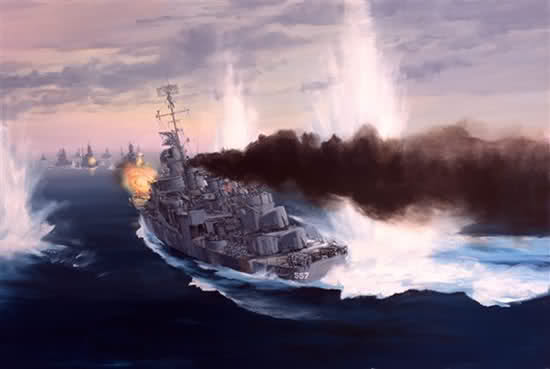 War is Hell.
What do you do when you, and a bunch of Sluggish minor Aircraft carriers you’re Guarding, are surprised by an Enemy (Jap) Battle Fleet baring down….which includes the Greatest Battleship ever built (the Japanese Yamato) , with the greatest Guns ever put to sea…and they start to Pound away at such a distance that your own puny guns are pitifully short on range?… and what’s worse… you are the only thing between this Enemy Fleet and your own Invasion force…which will be decimated if this Battle fleet succeeds in engaging the Invasion troop carriers and landing vessels????

This is a circumstance not in the training manual!
Well what Commander Evans of the USS Johnston, and a handful of other tiny ‘tin cans’ decided to do was not to run… not to abandon their Charges… but turned and drove headlong into Battle… against the Goliath…. And the Battle which ensued was the stuff of Legend!
She would not survive, and yet The tale of her exploits, and those of her companions effected World history by diverting the Japanese away from their objective of halting General Macarthur’s invasion of the Philippines.

Many rightly say that War should not be glorified.
War is indeed a disaster!
An evidence of Man’s Loss of God.
And yet despite all our hopes and prayers to the contrary…War… like so many horrible circumstances we can find ourselves enduring … is a reality…. and it is in such times of crisis that the Mettle of men is put to the test.

It is a time when Higher values (If you got em) come into play which inspire a Contempt for Death.
… I don’t know how I would fare under such conditions, having never face such a trial by fire, and yet I bow my head in reverence at hearing the of the truly heroic exploits as were the deeds of the Seamen aboard the USS Johnston and her Sisters in the Battle of Samar.
That such a tiny Vessel and her companions could against all odds put up such a fight…for so long …against such a formidible Adversary is the stuff of Legend… and WW2 was a time not only of great Tragedy, Great Brutality, and great waste…. but also an age of great Heroism, and great Humanity.

I just watched the Discovery’s ‘Ultimate Warfare’ coverage of this Historic Naval battle, and it was heart wrenching, and Glorious!
To appreciate what my Grandfathers generation went through to protect Western Civilisation from the Tyrannical Warmongering Axis powers.

It is in recalling such True stories of War Heroism in which the Thinking compassionate man will salute those who go into Battle for the sake of defending their Homelands from Foreign aggression, from terrorism, or as peace keepers attempting to establish order in lands of Anarchy, villainy, and Chaos.
Tim Wikiriwhi.

…Engagement of Taffy 3 [edit]Main article: Battle off Samar
On the morning of 23 October 1944, American submarines detected and attacked units of the Japanese fleet coming in from the South China Sea toward the precarious Leyte beachhead. The battleship-cruiser-destroyer Southern Force was decimated as it attempted to enter Leyte Gulf via Surigao Strait the night of 24/25 October. The more powerful battleship-cruiser-destroyer Center Force under Vice Admiral Takeo Kurita had been pounded by Admiral “Bull” Halsey’s attack carrier planes and presumably turned back from San Bernardino Strait. Admiral Halsey then raced north with his attack carriers and heavy battleships to engage a decoy Japanese carrier–battleship task force off Cape Engano. This left Johnston and her small escort carrier task unit as lonely sentinels in north Leyte Gulf, east of Samar and off San Bernardino Strait.

As enemy ships fled the Battle of Surigao Strait at daybreak of 25 October, the powerful Japanese Center Force slipped through San Bernardino Strait and into Leyte Gulf. It steamed along the coast of Samar directly for Johnston’s little task unit and the American invasion beachhead at Leyte, hoping to destroy amphibious shipping and American troops on shore.

One of the pilots flying patrol after dawn alert that morning reported the approach of Japanese Center Force. Steaming straight for “Taffy 3” were four battleships (including Yamato), eight cruisers (two light and six heavy), and 11 destroyers. Johnston’s gunnery officer—Lieutenant Robert C. Hagen—later reported, “We felt like little David without a slingshot.” In less than a minute, Johnston was zigzagging between the six escort carriers and the Japanese fleet and putting out a smoke screen over a 2,500 yd (2,300 m) front to conceal the carriers from the enemy gunners: “Even as we began laying smoke, the Japanese started lobbing shells at us and the Johnston had to zigzag between the splashes…. We were the first destroyer to make smoke, the first to start firing, the first to launch a torpedo attack….”[2]

For the first 20 minutes, Johnston could not return fire as the enemy cruisers and battleships’ heavy guns outranged Johnston’s 5 in (130 mm) guns. Not waiting for orders, Commander Evans broke formation and went on the offensive by ordering Johnston to speed directly toward the enemy—first a line of seven destroyers, next one light and three heavy cruisers, then the four battleships. To the east appeared three other cruisers and several destroyers.

As soon as range closed to within ten miles, Johnston fired on the heavy cruiser Kumano—the nearest ship—and scored several damaging hits. During her five-minute sprint into torpedo range, Johnston fired over 200 rounds at the enemy, then—under the direction of torpedo officer Lieutenant Jack K. Bechdel—made her torpedo attack. She got off all 10 torpedoes, then turned to retire behind a heavy smoke screen. When she came out of the smoke a minute later, Kumano could be seen burning furiously from a torpedo hit; her bow had been blown completely off, and she was forced to withdraw. Around this time, Johnston took three 14 in (360 mm) shell hits from Kongō, followed closely by three 6 in (150 mm) shells—from either a light cruiser or Yamato—which hit the bridge. The hits resulted in the loss of all power to the steering engine and all power to the three 5-inch guns in the aft part of the ship, and rendered the gyrocompass useless. A low-lying squall came up, and Johnston “ducked into it” for a few minutes of rapid repairs and salvage work. The bridge was abandoned and Commander Evans—who had lost two fingers on his left hand—went to the aft steering column to conn the ship.

At 07:50, Admiral Sprague ordered destroyers to make a torpedo attack: “small boys attack”. Johnston, unable to keep position with her damaged engine, and with her torpedoes already expended, nonetheless moved to provide fire support for the other destroyers. As she emerged from a smoke screen, she nearly collided with fellow destroyer Heermann. At 08:20, Johnston sighted a Kongō-class battleship—only 7,000 yd (6,400 m) away—emerging through the smoke. The destroyer opened fire, scoring multiple hits on the superstructure of the much larger ship. The return fire from the battleship missed clearly.

Johnston soon observed Gambier Bay under fire from an enemy cruiser, and engaged the cruiser in an effort to draw her fire away from the carrier. Johnston scored four hits on the heavy cruiser, then broke off as the Japanese destroyer squadron was seen closing rapidly on the American escort carriers. Johnston engaged the lead ship until it quit, then the second until the remaining enemy units broke off to get out of effective gun range before launching torpedoes, all of which missed. Then, Johnston’s luck ran out; she came under heavy fire from multiple enemy ships, and right when it was most needed, the damaged remaining engine quit, leaving her dead in the water.

Under attack from all sides [edit]The enemy ships closed in for an easy kill, pouring fire into the crippled destroyer. Johnston took a hit which knocked out one forward gun and damaged another, and her bridge was rendered untenable by fires and explosions resulting from a hit in her 40 mm ready ammunition locker. Evans—who had shifted his command to Johnston’s fantail—was yelling orders through an open hatch to men turning her rudder by hand. Crewmen from the destroyer escort Samuel B. Roberts spotted Evans at the fantail, asking “isn’t that their captain”, waving to them with what they did not realize was his only good hand.

At one of her batteries, a crewman kept calling “More shells! More shells!”[2] Still the destroyer battled to keep the Japanese destroyers and cruisers from reaching the five surviving American carriers: “We were now in a position where all the gallantry and guts in the world couldn’t save us, but we figured that help for the carrier must be on the way, and every minute’s delay might count…. By 9:30 we were going dead in the water; even the Japanese couldn’t miss us. They made a sort of running semicircle around our ship, shooting at us like a bunch of Indians attacking a prairie schooner. Our lone engine and fire room was knocked out; we lost all power, and even the indomitable skipper knew we were finished. At 9:45 he gave the saddest order a captain can give: ‘Abandon Ship.’… At 10:10 Johnston rolled over and began to sink. A Japanese destroyer came up to 1,000 yards and pumped a final shot into her to make sure she went down. A survivor saw the Japanese captain salute her as she went down. That was the end of Johnston.”[2]

From Johnston’s complement of 327 officers and men, only 141 were saved. Of the 186 men lost, about 50 were killed out-right by enemy action, 45 men later died on rafts from wounds; and 92 men—including Cmdr. Evans—got off Johnston before she sank, but were never heard from again.

2 thoughts on “War Time Heroism. Tin Can USS Johnston vs The Greatest Battleship of all Time.”