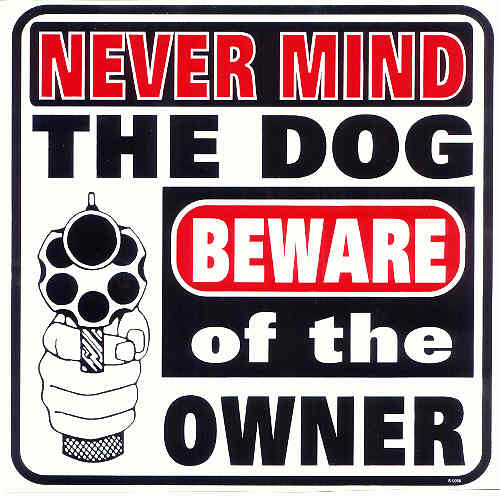 Suppose I copy a blog post that a libertarian claims is his intellectual property. Suppose I contend that people cannot own pieces of writing because copying is not theft. God creates. Man makes alternative arrangements. There is nothing new under the sun.

The initiation of force or the threat to initiate force is the mechanism that underlies all private property claims.

It’s a terrible thing that some libertarians can be driven to initiate force—even deadly force—because of bad metaphysics.

In part one of my series of what libertarians are huge fans of, the topic was coercion. They loves them some coercion. In today’s episode, we will discuss libertarian’s second great love: the initiation of force.

It’s quite simple. Libertarians believe that the initiation of force is wrong. So do the overwhelming majority of nonlibertarians. They, too, think it is wrong to commit offenses against person and property.

This is something libertarians like to say, especially the Ron Paul Internet ones. But it’s not actually true. Consider the following hypothetical scenario.

Now a libertarian will see this and object. They will say that, in fact, violently attacking me for wandering on to some piece of ground is not the initiation of force. It is defensive force. Aimlessly wandering on to ground is actually the initiation of force. I am the force initator because, despite touching and threatening nobody, I set foot on some piece of the world that the libertarian believes belongs to him.

But at this point, it’s clear that when the libertarians talk about not initiating force, they are using the word “initiation” in a very idiosyncratic way. They have packed into the word “initiation” their entire theory of who is entitled to what. What they actually mean by “initiation of force” is not some neutral notion of hauling off and physically attacking someone. Instead, the phrase “initiation of force” simply means “acting in a way that is inconsistent with the libertarian theory of entitlement, whether using force or not.” And then “defensive force” simply means “violently attacking people in a way that is consistent with the libertarian theory of entitlement.”

This definitional move is transparently silly and ultimately reveals a blatant and undeniable circularity in libertarian procedural reasoning. Libertarians like Richman claim that they think we can determine who is entitled to what by looking towards the principle of non-aggression (i.e. the principle of non-initiation of force). But then they define “non-aggression” by referring to their theory of who is entitled to what.

In reality, all systems of allocating scarce resources that lack totally unanimous consent operate off of coercion, violence, and the initiation of force. This is a function of scarcity. You wont ever get around it until you make matter and space itself non-scarce. Like every other theory of how to justly allocate scarcity, libertarians are huge fans of using coercion, violence, and aggression to make people who disagree with them conform to their views regarding who should get what. What they do to try to appeal to the dim is simply pack their view of who should get what into their very specialized definitions of coercion, violence, and initiation of force in order to be able to say they aren’t triggering those specific words. It is truly remarkable to watch the number of minds captured by what amounts to a fairly transparent word game.

The real debate between theories of economic justice is always and anywhere about who should be entitled to what. Appealing to non-aggression when people disagree about what belongs to whom does nothing in the debate whatsoever. We only know what is and isn’t “aggressive” after we have determined what belongs to whom. It is a word that gets its meaning from our theory of entitlement. So taxing someone, for instance, is only aggressive if you think the amount being taxed belongs to the person being taxed. But if you believe the amount being taxed belongs to whomever the money is going to (say a retired person), then it isn’t aggressive. The force involved in extracting the tax when someone resists is simply defensive force.

So to Richman’s point that everyone is already basically libertarian, the question to ask yourself is whether everyone basically agrees with the libertarian view of who should be entitled to what. And the answer to that question is clearly no.

There is no overlapping consensus.

There is no consent of the governed.

To justify their violent governmental inclinations, minarchists must look elsewhere.

6 thoughts on “Libertarians are Huge Fans of Initiating Force”