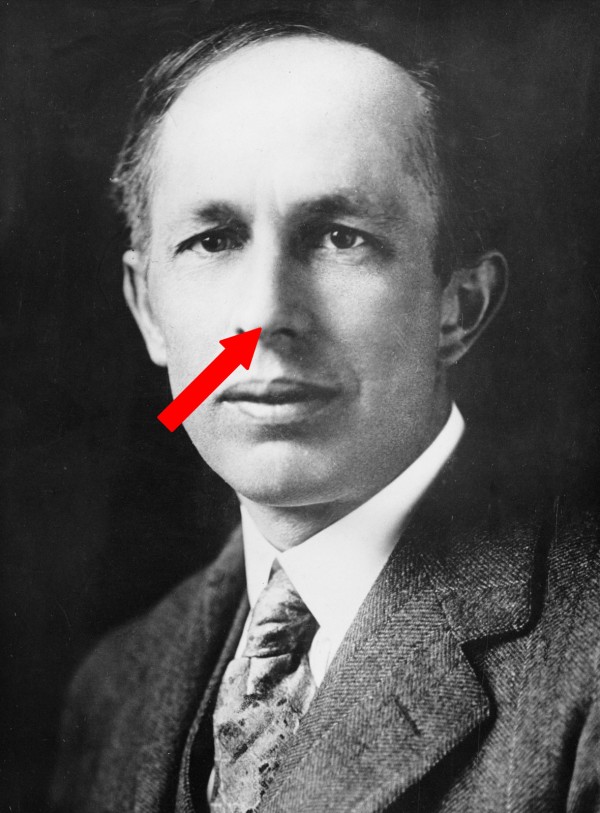 Your freedom ends where my nose begins.

Various permutations of this quote have been incorrectly attributed to Oliver Wendell Holmes, but it was actually written by Zechariah Chafee (pictured above).

Zechariah Chafee, Jr. (December 7, 1885 – February 8, 1957) was an American judicial philosopher and civil libertarian. An advocate for free speech, he was described by Senator Joseph McCarthy as “dangerous” to the United States.

In June 1919 the Harvard Law Review published an article by Zechariah Chafee, Jr. titled “Freedom of Speech in War Time” and it contained a version of the expression spoken by an anonymous judge.

Each side takes the position of the man who was arrested for swinging his arms and hitting another in the nose, and asked the judge if he did not have a right to swing his arms in a free country. “Your right to swing your arms ends just where the other man’s nose begins.”

According to the Quote Investigator, the genesis of this adage can be traced back more than thirty-five additional years. Several variants of the expression were employed by alcohol Prohibitionists. For decades the saying was used at pro-Prohibition rallies and meetings. Such is the colourful history of this libertarian adage. But I digress.

Your right to swing your arms ends just where the other man’s nose begins.

Your freedom ends where my nose begins.

Back in 2002, Winona Ryder was convicted of shoplifting $5,500 worth of merchandise from a Beverly Hills Saks Fifth Avenue. According to the Onion, one of the terms of her probation was

May no longer walk into stores and just take things.

This is also one of the terms of living in a libertarian society. Kiss goodbye your freedoom to walk into stores and just take things!

Libertarianism is all about sacrificing some of our rights and liberties—e.g., the right to swing our arms and the liberty to walk into stores and just take things—for the security of private property rights.

Any society that would give up a little liberty to gain a little security deserves neither and will lose both.

17 thoughts on “Your freedom ends (where my property rights begin)”