I was saddened to read that Lindsay Perigo’s forum Sense of Life Objectivists (SOLO) has gone down.

Here‘s my SOLO blog. I posted and commented there between November 2007 and February 2013.

In the end, SOLO’s proprietor succumbed to GDS. (He may yet succumb to something momentous.)

I had two main gripes with SOLO and SOLOists.

They misrepresented me. From the outset.

And they misrepresented themselves as advocates and champions of Reason. Typically, SOLOists have no interest in, and no aptitude for, Reason. As my posts here, here and here amply demonstrate.

Anyway, Perigo insists that SOLO is down but not out. It will be back from the dead, perhaps even as soon as next month. I look forward to the resurrected SOLO.

Meanwhile, in other news from beyond the grave … 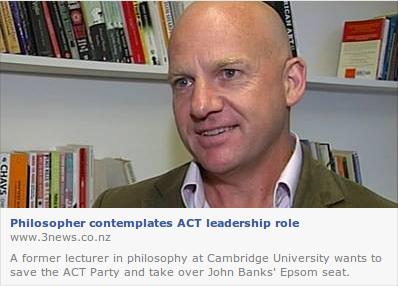 A former lecturer in philosophy at Cambridge University wants to save the ACT Party and take over John Banks’ Epsom seat.

He’s Jamie Whyte, a management consultant, writer and committed advocate of the free market who has been living in Britain.

With Mr Banks on the way out, ACT is in the worst shape it’s ever been in and history hasn’t been kind to the party.

“Jamie Whyte does well to save himself, but he’s going to do his best to save ACT,” says Mr Whyte.

“I believe in the principles of ACT.”

A free PDF of Jamie Whyte’s Free Thoughts is available from the Adam Smith Institute here.

From what I’ve read so far, Whyte is surely the man to lead ACT back from oblivion.

(He makes some points with which I disagree, e.g., his Times column, I don’t believe that believers really believe, contains a number of egregious errors. Perhaps I’ll point them out to him and explain why they’re errors. I’m sure he’ll listen to Reason.)