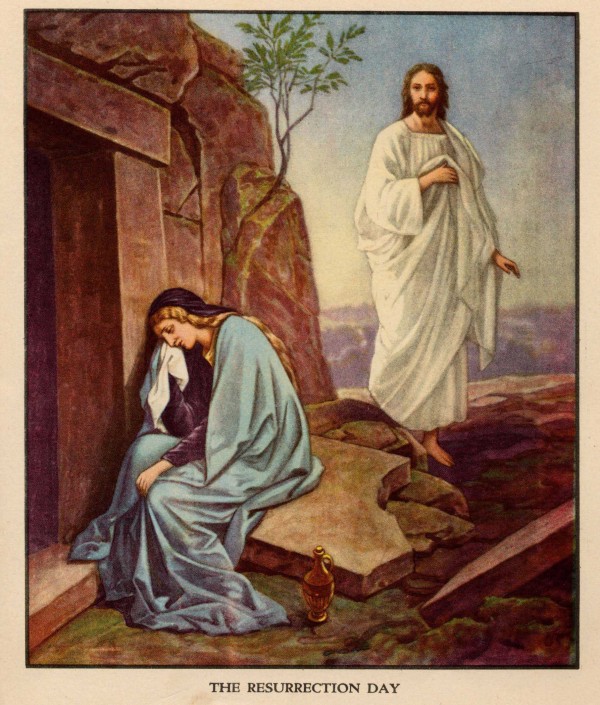 Jesus never “came back to life again” – at least, not in the same human form or the kind of life that he had or that we live. That is actually an incorrect message that is passed on in ignorance. If you read the Bible you will see that he only ever appeared in spirit form following the resurrection, in the same form that angels appear(ed) and possess. And I (and many millions of others) have indeed seen this exact same form for ourselves in our own lives at very different and unexpected times and in very different and unexpected places. There are literally thousands of normal and perfectly sane people who for some unknown reason have been presented with this vision. I and many of the people whose books I have read or youtube accounts I have watched were not even Christian at the time. But there is one thing that each of us has had in common: the spirit form is a shimmering white form with a human-type head. It is like us. 🙂

Now, she’s a jolly good fellow Christian an’ all, but this is a heinous heresy! It’s post-mortem Docetism!

Jesus was resurrected in bodily form. We read in the Gospel of Luke how, after Jesus’ body was reported missing from the tomb, two of his followers met Jesus on the road to Emmaus.

Now that same day two of them were going to a village called Emmaus, about seven miles from Jerusalem. They were talking with each other about everything that had happened. As they talked and discussed these things with each other, Jesus himself came up and walked along with them; but they were kept from recognizing him.

He asked them, “What are you discussing together as you walk along?”

They stood still, their faces downcast. One of them, named Cleopas, asked him, “Are you the only one visiting Jerusalem who does not know the things that have happened there in these days?”

“What things?” he asked.

“About Jesus of Nazareth,” they replied. …

As they approached the village to which they were going, Jesus continued on as if he were going farther. But they urged him strongly, “Stay with us, for it is nearly evening; the day is almost over.” So he went in to stay with them.

When he was at the table with them, he took bread, gave thanks, broke it and began to give it to them. Then their eyes were opened and they recognized him, and he disappeared from their sight. (NIV)

That “he disappeared from their sight” does not necessarily mean that Jesus vanished like an apparition. If Jesus had appeared to the two followers as “a shimmering white form with a human-type head” I think they’d have noticed, don’t you?

Later, Jesus appeared again, this time to a group which included the eleven remaining disciples.

While they were still talking about this, Jesus himself stood among them and said to them, “Peace be with you.”

They were startled and frightened, thinking they saw a ghost. He said to them, “Why are you troubled, and why do doubts rise in your minds? Look at my hands and my feet. It is I myself! Touch me and see; a ghost does not have flesh and bones, as you see I have.”

When he had said this, he showed them his hands and feet. And while they still did not believe it because of joy and amazement, he asked them, “Do you have anything here to eat?” They gave him a piece of broiled fish, and he took it and ate it in their presence. (NIV)

Jesus himself denied being a ghost! He was “flesh and bones,” not “in spirit form”. In fact, he was hungry, and ate a piece of fish! Ghosts just don’t do that. Jesus certainly did come back to life, and in the same human form he had before his crucifixion.

In fact, this belief, in the bodily resurrection of Jesus, is Christianity’s central tenet. Paul certainly seemed to think so. He says in 1 Corinthians 15

Now if there is no resurrection, what will those do who are baptized for the dead? If the dead are not raised at all, why are people baptized for them? And as for us, why do we endanger ourselves every hour? I face death every day—yes, just as surely as I boast about you in Christ Jesus our Lord. If I fought wild beasts in Ephesus with no more than human hopes, what have I gained? If the dead are not raised,

“Let us eat and drink,
for tomorrow we die.” (NIV)

Having highlighted someone else’s heresy, what of my own? I think of the coming Resurrection of the Dead in terms of software and hardware. It’s the software that matters, not the hardware. Same program, different machine. Doesn’t matter, as long as the software licence permits installation on more than one machine. Or does it? Somebody called Eric says

I think it is very important to address 1 Corinthians 15, especially in regard to Chuck Smith. According to Paul, those who deny the bodily resurrection at the last day are divisive and enemies of the faith. Unfortunately, Chuck Smith clearly denies boldily resurrection, and instead teaches an innovative heresy of bodily replacement.

According to the Apostle Paul, doctrinal error that is held to at all costs by those not willing to be corrected causes division. He relates this specifically in his second letter to Timothy to the doctrine of the resurrection of Jesus Christ from the dead, which is the crux of the good news God has called him to preach. (2 Tim. 2:8) There is no other issue more important. No other issue demands our sobriety and clear-thinking and prayer as Christians as does the doctrine of the resurrection of Christ. If he did not resurrect, if His selfsame body did not leave the tomb after three days bearing the scars of crucifixion, then we are doomed and we have no hope.

Selfsame body or replacement body? Is the latter heretical? If it is, at least it’s “innovative”!

But does it really matter? I think the authors of the comic strip Coffee With Jesus have it right.