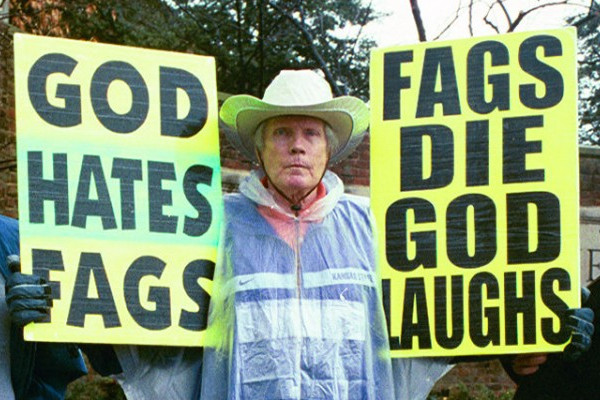 Fred Phelps thought that fags were special. They’re not.

Fags think that fags are special. They’re not.

None of us is special.

We all sin differently. Schadenfreude is a sin. (It’s a form of vengeance. “Schadenfreude is mine; I will laugh, saith the Lord.” Perhaps Fred Phelps got that bit right.)

You people are fucked in the head for rejoicing in another human beings death, no matter how much of a cunt he was.

Fred Phelps has died! Let’s spread a little hate worldwide! No, wait … let’s not do that.

Let’s picket his funeral instead!

I’d rather see them play a set out front than picket it!

Me too, bro. But I suspect that news article’s a hoax, anyway. So let’s have another ridiculously over-the-top Slayer fan video instead. 🙂

Just a note on Slayer. Slayer’s lyrics are sometimes anti-Christian, due in large part to the fact that guitarist Kerry King is a notorious atheist douche-bag. Notwithstanding that some heavy metal bands (whom I won’t name) are genuinely anti-Christian, Slayer is not really an anti-Christian band. Art is art. It’s just an image thing.

It’s not that these people believe in this stuff. It’s just … a cool imagery that goes along with the music …

Slayer is just a bunch of guys having fun. Metal is fun! Keep it metal!

God loves us all. He loves fags, Fred Phelps, Slayer, the Schadenfreuders … and you. Repent!
Repent now and accept God’s gift of eternal life.

RIP Fred Phelps. (Goodbye and thanks for all the good excuses to post more Slayer.)

7 thoughts on “God hates fags? God hates us all!”