Those of us who have been watching events in Nevada shouted a victory cry at the News that a Cowboy showdown had resulted in the release of the Cattle and the exit of the BLM Bullies.
Truly Epic!
Described by Info wars reporter as ‘a Tiananmen square moment’ … “either they were going to get the Cattle back or they were going to become Cattle”

Yet is the celebration too early?
What will become of the brave people who heeded the call to arms once they have each returned to their homes…. and the Dust has settled?

Two things worked in favour of the People and against the tyrannical powers.
The Independent media and social networking/ blogging etc, and the amount of Public looking on from the busy highway which passed directly through where this showdown took place.

Even though the Tyrants instituted a ‘no fly zone’ to try and control what information went out to the world… there was still too many Observers for the truth to be covered up and explained away.

Yet they could roll back in like Tumbleweeds any time…. and ‘take out’ the Bundys…. like they did Bin Laden…. so quickly that there will not be time for the militia to Re-deploy.

And will these Militia even exist?
They are now targets for annihilation… enemies of the State.

Why was there no mention of these events in the world media???
Obviously the US government is orchestrating a Media blackout. 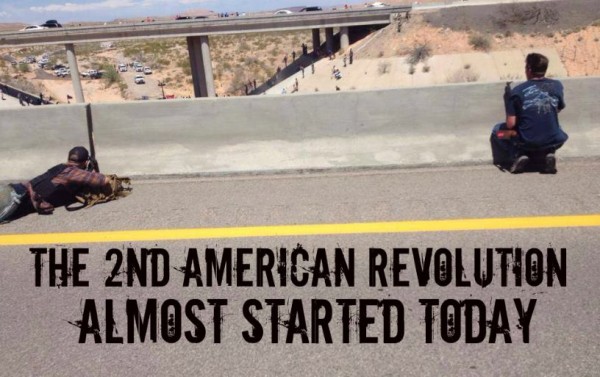 From Doug Hagmann:
“At 1750 hours ET, I was contacted by my source within the Department of Homeland Security regarding the current situation at the Bundy Ranch. To put it bluntly, the people are being hoodwinked into believing that the situation is being resolved. It is not. It is a strategic de-escalation to fool the public. This source stated that the retreat of the BLM agents and the release of the cattle was actually crafted as a potential plan yesterday (Friday, 11 April 2014) based on the following:
1. A military assessment of satellite and drone surveillance imagery of the “patriot resistance. Drones under the control of the U.S. military were in use, taking real-time photographic images of not just the activity at the ranch, but “identifying the protesters, any arms and any supplies they might have or be carrying. “Mission accomplished.”
2. Real-time communication intercepts between patriots on-site and their off-site support;
3. Active monitoring of internet traffic regarding the coverage of events at ranch;
4. The monitoring of real-time video from the scene.
This source stated that a response by the patriot movement was anticipated, although exceeded their expectations. Although this was a real operation, they also ran this as a test case for future government operations once they saw the response. They were also actively managing the media, in some cases threatening to cut off White House access to anyone covering the event.
Despite this, the coverage by the alternative media began to create a public relations problem that was not easily managed. Note the lack of acknowledgment by the White House regarding this event. They are intentionally framing it as a state issue, despite the fact that all federal response has been and continues to be from the White House. There is a reason for this – a reason that has not been identified in any of the public reports to date. I will explain in further detail in a follow-up report on Sunday, after this source attends [redacted] to obtain more specific information about future federal operations. Regardless, according to this source, the government will take back ‘their land’ as they must to fulfill international obligations. It was never about grazing rights or anything other than (1) “securing clear title” to the land, and (2) further demonizing any patriotic resistance. It is my understanding, based on the information from this source, that it is a critical task to create a situation that will also advance their agenda of gun control and confiscation.
A more detailed report will follow on Sunday, 13 April 2014, with additional and much more specific information about their inside plans and future operations.
PLEASE MAKE THIS VIRAL!”

5 thoughts on “High Noon at the Bundy Ranch. “A Tiananmen square moment”.”