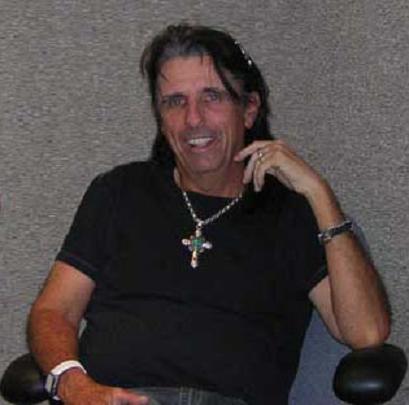 The father of shock rock whose music and stage antics have outraged parents for more than 30 years told how the fear of hell turned him to God.

Alice Cooper, who sang about necrophilia and chopped up baby dolls during his concerts, said that although he continues to record and tour with a theatrical horror-style show, “My life is dedicated to follow Christ.”

Although he became a Christian in the 1980s, apart from brief comments in some interviews the 66-year-old singer has always been guarded about his faith – until now. But in a frank interview with a Christian music magazine, he spoke at length publicly for the first time about his love for God and reluctance to become a “Christian celebrity.”

A chart-topper with the teen anthem “School’s Out,” Cooper – who legally changed his name from Vince Furnier – has been credited with paving the way for performers such as Marilyn Manson.

But he maintains that his act was never political or religious and always had “a sense of humor.” He told HM: The Hard Music Magazine that he was always insulted whenever he was accused of being satanic. Raised in a Christian home, he still believed in God, although he was not committed.

That changed when alcoholism threatened his marriage. He and his wife, Sheryl, attended a church with a “hellfire pastor.” Cooper said he became a Christian “initially more out of the fear of God, rather than the love of God … I did not want to go to hell.” Interviewed for HM’s March/April issue, Cooper views his faith as “an ongoing thing.”

“Being a Christian is something you just progress in. You learn. You go to your Bible studies. You pray,” he said.

He has avoided “celebrity Christianity,” because “it’s really easy to focus on Alice Cooper and not on Christ. I’m a rock singer. I’m nothing more than that. I’m not a philosopher. I consider myself low on the totem pole of knowledgeable Christians. So, don’t look for answers from me.”

Yet he has been able to speak to others in the music scene about his faith.

One thought on “Alice Cooper; ‘My life is dedicated to follow Christ’”