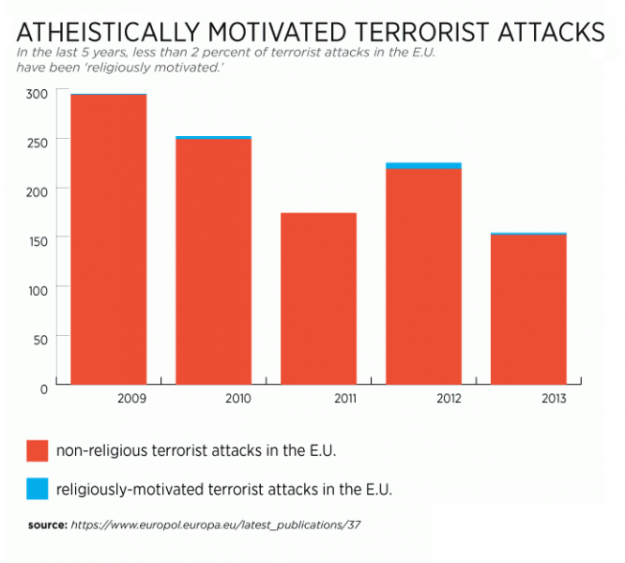 98% of terrorist attacks in the European Union are atheistically motivated.

That’s the direct implication of the latest stats released by Europol, although of course the MSM don’t phrase it like that, for fear of offending the godless community.

The murdering spree by two gunmen on the offices of a French satirical magazine have incited horror across the world. That’s completely justified. But what’s been lost in the mass outpourings of solidarity and condemnations of barbarity is the fact that so few of the terrorist attacks carried out in European Union countries are related to Islamist militancy. In fact, in the last five year, less than 2 percent of all terrorist attacks in the E.U. have been “religiously motivated.”

It really shouldn’t come as any surprise that this century we are seeing a continuation of the heathen holocaust of the last. The 20th century’s three worst mass murderers—Hitler, Stalin and Mao—were all atheists.

Moderate atheists like Richard Dawkins notoriously try to deflect responsibility for the brutality of their brothers in unbelief, saying that militant atheists are not representative of so-called secularism. I beg to differ. Atheism itself is the anathema we must face up to and face down or Europe will soon succumb to the secularist swarm.

Believe it or not, atheist apologists go so far even as to claim that Hitler was a Christian on the strength of Hitler’s own words! Do they also seriously believe that Hitler never intended to invade Poland, but unexpectedly changed his mind after promising Chamberlain “peace for our time”?

Check out this example of brazen blame-shifting from atheist apologist Michael Sherlock.

“Besides that, I believe one thing: there is a Lord God! And this Lord God creates the peoples.” ~Adolf Hitler

“We were convinced that the people need and require this faith. We have therefore undertaken the fight against the atheistic movement, and that not merely with a few theoretical declarations; we have stamped it out” ~Adolf Hitler

Hitler was a Christian. This undeniable fact couldn’t be made any clearer than by his own confessions.

Sherlock’s claim, that Hitler was a Christian, simply beggars belief. But it’s easily and swiftly dealt with. Hitler himself refutes the claim in his mendacious Mein Kampf manifesto. He writes that “faith is the sole foundation of a moral attitude.” Hitler had no moral attitude—as the murder of 17 million people by his Nazi regime amply attests—and therefore no faith. Also, Jesus was a Jew. (Hitler was an anti-Semite.) 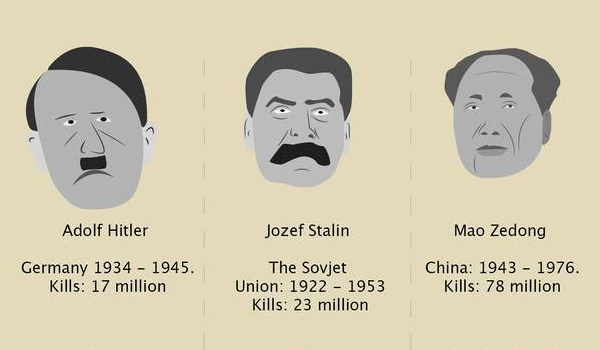 Godlessness killed 118 million in atheist atrocities last century and with the untold dead already unreported by a collusional MSM those who absent themselves from belief in God today are well on their way to a way worse tally in the next.

11 thoughts on “98% Of Terrorist Attacks In The E.U. Are Atheistically Motivated”