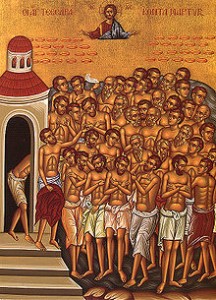 While Christianity had officially been legalized in 313AD, the Eastern Emperor Licinius continued to cause trouble for Christians, most famously in Sebaste (in central modern Turkey) where he had forty of his soldiers stripped naked and frozen to death on a lake.  The story goes that, while one of the soldiers acquiesced and renounced his faith, another soldier, on seeing this, confessed Christ, threw off his clothes, and joined the other 39 on the ice.  While their bodies were burned the next day and the ashes scattered, Christians gathered as much of their relics as they were able.

The bravery of these forty men soon became renowned, and there are many churches now dedicated to them, including a chapel in the Church of the Holy Sepulchre in Jerusalem.  They are even mentioned in the modern Orthodox wedding service as examples of how a couple must sacrifice for one another! 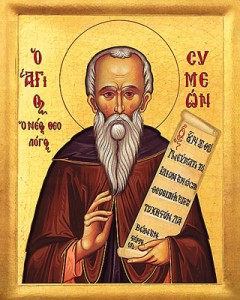 Symeon, a monastic of Constantinople in the Roman Empire, is one of only three Saints to be given the title “Theologian” by the Church (the others being the Apostle John, and Gregory Nazianzus, an Archbishop of Constantinople).  A controversial figure whose unconventional ways as a monk and abbot often put him offside with his brethren, his major themes were the direct experience of God through the ascetic life (not academic knowledge or learning), God as Divine Light, and the importance for every Christian of having a spiritual father – a more senior figure to whom one could be accountable in one’s walk and seek guidance from.

Saint Symeon, more than any other Saint, is probably the embodiment of the “mystical East” in terms of what sets Orthodoxy apart.  I am hoping to read some of his work and familiarize myself with him more in future. 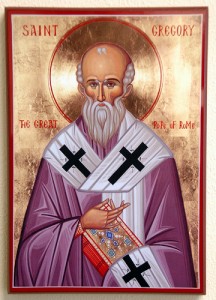 Gregory, along with Leo a century and a half earlier, is probably the most revered of all the canonical Roman Popes, presiding during a period when Rome had been reunited with the empire bearing its name.  He is famous for sending the missionary Augustine of Canterbury to re-evangelise Britain after the settlement of English tribes there.  He also is famous as a liturgist, having composed the bulk of what is now, in the Orthodox Church, the weekday lenten Eucharistic service (the Liturgy of the Presanctified Gifts).  Gregorian chant is attributed to him.  Ironically, given the nature of the modern papacy, he defended the equality of the Bishops against the Bishop of Constantinople, who had recently taken the title “Ecumenical”.

On a personal level, Gregory was renowned for his pious monastic way of life, and his generosity towards the poor.  During his reign, the Byzantine holdings on the Italian peninsula began to shift more and more under Papal, rather than imperial command, spurred by necessity from Lombard incursion and a lack of leadership from the East.