GREGORY PALAMAS (1296-1359)
This Sunday 8th March is the Sunday of Gregory Palamas, a pivotal figure in Christianity and specifically in the Eastern understanding of Christian faith. 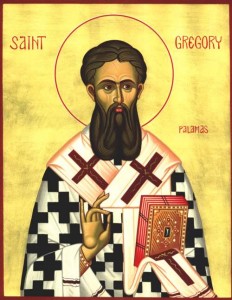 By the 14th Century, the Roman Catholics had solidified their break from the traditional faith.  In addition to the filioque – the idea that the Holy Spirit proceeds from the Son as well as God the Father, they now taught penal substitutionary atonement as their primary soteriology, and had introduced the concept of a legalistic purgatory, as well as defined indulgences to alleviate the harsh torture of such a supposed place.  Their vision of the faith had turned scholastic and theoretical.

Into this debate came Gregory Palamas, who, having learned traditional hesychastic prayer on Mt Athos, promulgated the more noetic view of faith – that God is experienced, not philosophised into existence, that experiencing God comes through prayer of the heart and quietness, not intellectual musing.  Furthermore, when God is experienced in His fullness, as the three Apostles experienced Him at Christ’s Transfiguration, then this experience itself is uncreated – God’s light is not a creation of God, but God Himself.  God has an essence, which cannot be known or experienced, but He also has uncreated energies, which can be experienced.  These energies constitute God’s grace, which Western Christians spearheaded by the monk Barlaam tried to argue was not uncreated, but a created product of God, and that in seeking God, philosophy was more useful than prophecy, prayer or visions.

Gregory’s theology was controversial, and came under huge scrutiny by Barlaam, and by many people in the Eastern Church.  Finally, there was a Council in Constantinople in 1341, and the Church came down on the side of Gregory:  The Uncreated Light was real and Christianity was an experiential, not a scholastic faith, and to this day this is the Orthodox Christian approach.

Here’s a nun to talk all about him: 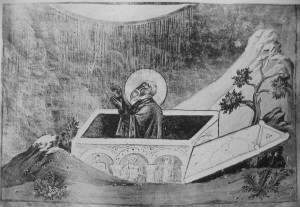 I wasn’t planning to write about this fellow, but he came up as a Saint of the Day on Wednesday (4th March) and I was blown away by his story.  How many Saints out there have sex with a teenage girl, then kill her to hide the evidence?!  And yet this is the story of Saint James the Faster – a great ascetic of the Eastern Roman Empire from what is now Lebanon, who even burned his own hand to stop himself from having sex with a temptress, only to sin with, and then kill, a young girl he had healed from demon possession.  In James we see the worst of the worst – it’s hard to imagine a greater fall from grace – and yet he bounced back and was healed and restored by God… after spending ten years sleeping in an open grave of course!  Saint James, like King David before him, is testament to the unmerited grace of God, and the truth than anyone can be redeemed. 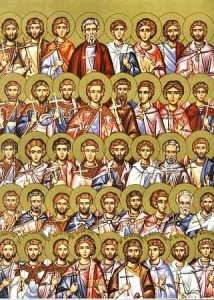 The recent martyrdom of the 21 Coptic Christians in Libya is nothing new.  In fact, on March 6th 845, Muslims beheaded 42 Christian Generals nearly 1200 years ago after capturing them during a war of conquest in modern day Turkey.  They were kept prisoner for 7 years in Samarra, then martyred when, after many tortures, they would not submit to Islam and deny Christ.  The more things change, the more they stay the same…