I’ve kinda been busy getting married and whatnot, so I wasn’t sure what to do in resuming Saints of the Week – do I cover all the ones I missed, or do I just resume for the week at hand and just try and catch some of them at a later date?  I’ve decided to do the latter. 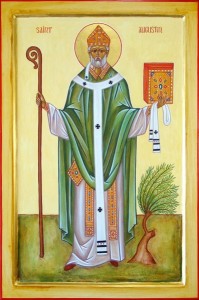 Augustine is a controversial figure.  While he is lionised in Western Christianity as the go-to expounder of orthodox Christian doctrine, (and in fact, is probably the only first millenium Church Father most evangelicals could name), he is treated with suspicion by many Orthodox Christians.  While he is technically a Saint of the Orthodox Church as well, it is fashionable to only acknowledge this begrudgingly – sometimes through referring to him not as a Saint but as “Blessed” Augustine.  This damnation with faint praise is not entirely without foundation – while “Blessed” acknowledges the vast and valuable contribution he made to Christian theology, it also acknowledges that Augustine was out of step with other Church Fathers on many points, and in fact remains the source of several heretical ideas that to this day are bog-standard beliefs in either Roman Catholicism, Protestantism, or both.

Much of his popularity in the West stems from the fact that he was the first prominent Church Father to write exclusively in Latin, owing to his lack of proficiency in Greek.  For many in the West, especially the Germanic tribes who overtook the Western Roman Empire, this made Augustine’s voluminous works their only easily accessible theological source.  While other contemporary Fathers also proposed erroneous ideas, their errors were all in Greek and did not get amplified, but were instead corrected over time by the Church.  Augustine’s ideas, however, had no competition, and especially as the Western Empire disintegrated and the Dark Ages took hold, the West became characterized by a lack of scholarship, divided from the intellectual heft of the Eastern Romans.  So, in the West, we see Augustine’s novel proposal that the Holy Spirit proceeds from the Son as well as the Father, take hold.  We see the popularity of the notion of “original sin”, and that this sin is sexually transmitted to one’s offspring.  It was also from his writings that Western notions of predestination developed.  It was many of these beliefs that were a factor in the Great Schism between the Western and Eastern Church in the 11th Century, a schism that remains to this day.

Despite this, Augustine fleshed out many theological ideas that are Orthodox, and he remains a treasured asset to the Church.  His personal story of redemption is also compelling, a misspent youth followed by a dramatic conversion, a baptism by Ambrose of Milan, and eventually being appointed Bishop of Hippo in what is now modern Tunisia, all of which should be sufficient to confirm his status as a holy intercessor.  He passed away from illness as the Vandal armies laid siege to Roman Africa.

With Augustine, the Church also commemorates Saint Jerome.   Born into a Christian family in what is now modern Bosnia, he dedicated his life to being a scholar and a monk, studying under various people in various parts of the empire, including under Gregory the Theologian in Constantinople, where he was ordained a Priest.  Returning to Rome as an assistant to Pope Damasus in 382AD, he was commissioned to make a translation of the Scriptures into Latin, a consistent compendium of which did not exist at the time.  This translation became know as the Vulgate – an invaluable resource to the Church’s evangelism in the Western Empire, and is the work for which Jerome is most famous.

After the death of Damasus in 384AD, he left Rome and eventually took up as a monastic hermit in Palestine, where he continued to write.  His defence of Mary as being ever-virgin is still a compelling rebuttal to those who would claim she had other children besides Christ.  After Augustine, he remains the second most voluminous Christian writer in the Latin tongue.  He reposed in peace near Bethlehem in 420AD. 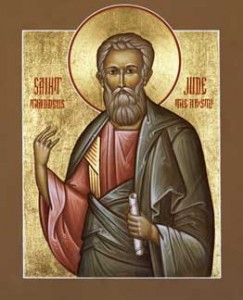 Jude is my wife’s name Saint, and his icon hangs proudly on our wall.  A son of Joseph and brother of the Apostle James, he was slow to accept his younger stepbrother as the Christ, and tradition has it that on the death of Joseph he objected to Jesus receiving a share of the inheritance.  He later came to faith and was made an Apostle, and following the Resurrection, went out preaching to numerous regions.  The book of Jude in the New Testament is attributed to him.  He is also regarded as the patron Saint of Armenia, having been martyred there by being shot with arrows.

In the Latin church, Jude has developed a following as the patron of lost causes.  While this has never been his reputation in the East, he is hymned as a healer and an “unshakeable pillar of the Church of Christ”.