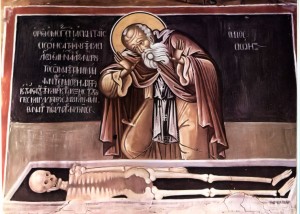 Many Saints of the Church are very difficult to write about in an entertaining way – especially those who live their lives in solitude as tonsured monastics.  It is truly and literally a case of “no news is good news” – they stay in solitude and pray, and achieve a holiness that radiates Christ’s Light.  So it is with Sisoës, whose asceticism and temperance stands as an example of what is possible with humility and love of God.

Sisoës, originally from Alexandria in Egypt, lived for many years in a desert cave with the relics of Saint Anthony, the father of the monastic movement.  The most famous story told about him attests to his humility.  When St Sisoës lay upon his deathbed, his disciples saw that his face shone like the sun. They asked the dying man what he saw. Abba Sisoës replied that he saw Saint Anthony, the Prophets and the Apostles. His face increased in brightness, and he spoke with someone. The monks asked, “With whom are you speaking, Father?” He said that angels had come for his soul, and he was entreating them to give him a little more time for repentance. The monks said, “You have no need for repentance, Father” Saint Sisoës said with great humility, “I do not think that I have even begun to repent.”

He is often depicted in icons standing above the bones of Alexander the Great, a reminder to Christians that death humbles the proud.

Olga is regarded as the first Russian Christian, and is given the title of Equal to the Apostles by the Church.  The wife of Igor, the ruler of Kievan Rus, she became a Christian and was baptised on a state visit to the Roman capital of Constantinople in 957AD.

While her conversion did not have an immediate effect on the Russians, and her son, who ruled at the time, did not embrace the faith, she is still venerated as the first Russian Saint, and it is almost certain that if it were not for her influence and prayers, her grandson Vladimir would not himself have dramatically converted and dramatically turned Kievan Rus into a Christian nation nearly twenty years after her death.